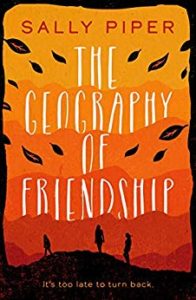 Today is my day on the blog tour for The Geography of Friendship by Sally Piper and I’m reviewing the book today. Hasn’t it got a gorgeous, vibrant cover? My thanks to Lucy Chamberlain for the place on the tour and the review copy of the book.

When three women set off on a hike through the wilderness they are anticipating the adventure of a lifetime. Over the next five days, as they face up to the challenging terrain, it soon becomes clear they are not alone.

Lisa, Samantha and Nicole have known each other since school. Lisa is a fighter, Samantha a peacekeeper and Nicole a rule follower. United they bring out the best in one another.

Only once it is too late for them to turn back do they appreciate the danger they are in. Their friendship is tested, and each of them must make a choice that will change their lives forever.

The Geography of Friendship is a quite intense and atmospheric read. Set in the Australian bush, we follow three women as they recreate a hike that they first undertook more than twenty years previously.

Nicole, Lisa and Samantha were friends back then, school friends in fact, but have drifted apart over the years. Something happened that first time round that changed all of their lives and they need to deal with it by going through the motions of the hike all over again.

First of all, the setting. It’s not an easy hike and it honestly feels as though the bush is the fourth character. As I say, atmospheric and evocative. The three women seem uneasy, both times around, with the wilderness around them and the potential dangers lurking within. The pivotal event comes quite late in the book so there is a sense of foreboding throughout. We know who might be involved but not what is going to happen.

The chapters focus on one character in turn, looking back at the way their lives have turned out and we see how the first hike may have affected them. There’s also the dynamic between the three women thrown into the mix. Their relationship isn’t always easy.

I found this to be a quite densely written book and as such not the easiest of reads. It’s quite introspective and it’s definitely a slow burner of a story, but I did find it a story that I wanted to stick with to find out what happened and why it affected the women so much.

This is very much a story of friendship and one defining event that both bound the characters together, and at the same time pushed them apart. As a debut, it’s accomplished and well-plotted. Sally Piper is an Australian-based writer. Her debut novel Grace’s Table (UQP 2014) was shortlisted in the 2011 Queensland Premier’s Literary Award – Emerging Queensland Author category and in 2013 she was awarded a Varuna Publishing Fellowship for her manuscript.  Sally has had short fiction and non-fiction published in various online and print publications, including a prize-winning short story in the first One Book Many Brisbanes anthology, The Sydney Morning Herald, The Saturday Paper, Weekend Australian and WQ plus other literary magazines and journals in the UK. She has been interviewed for radio, been a guest panellist at literary festivals and delivered many author talks and readings.