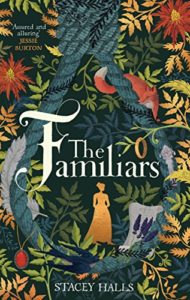 Hooray, I’ve finally read The Familiars by Stacey Halls. I’ve been really looking forward to it and I wasn’t disappointed. I buddy read it with some bookish friends which has been a brilliant experience. My thanks to the publishers, Zaffre, for my proof copy of the book provided through the Amazon Vine programme and apologies for being so slow to read it.

As Alice is drawn into the witchcraft accusations that are sweeping the north-west, Fleetwood risks everything by trying to help her. But is there more to Alice than meets the eye?

The year is 1612 and Fleetwood Shuttleworth is 17 years old and pregnant for the fourth time. I found this fact incredible and hard to imagine. She lives at Gawthorpe Hall in Lancashire with her husband, Richard. He’s quite a powerful man and older than Fleetwood, but their relationship seems genuine, much more so than many unions at the time.

Although this is her fourth pregnancy, Fleetwood is yet to carry a baby to full term and she’s desperate to do so this time. She stumbles across Alice Grey who tells her that she is a midwife and Fleetwood hires her to help her through her pregnancy. The two women become unlikely friends and allies.

This is the most wonderful story. It’s set at such a dangerous time as women are being rounded up and put on trial for being witches. So much of their behaviour makes sense in modern times but in the early seventeenth century it was looked upon in quite a different way. I managed to refrain from looking up events of the time on the internet but there is very much a root in real life events in this story and Stacey Halls has done an amazing job in weaving together fact and fiction to create a truly impressive novel.

As I suggested at the beginning of this review, Fleetwood is quite a woman, especially for one so young. She’s feisty and brave and will go to any lengths to try and save her friend from the hangman’s noose after she is accused of witchcraft. I was totally in awe of her. She’s mistress of a large house and is expected to kowtow, both to her husband and to men in power, but no way is she going to do that!

Despite his faults, I also liked Richard and I felt there was something genuine about him and that he really cared for Fleetwood. And Alice, well she’s a good friend to Fleetwood and a very good midwife. There are some rather unpleasant characters too, not least Fleetwood’s own mother and the local magistrate, Roger Nowell.

The story is chilling as we all know about the Pendle witch trials and know what happened to those accused. I was just willing Fleetwood to find a way to save Alice and to save herself and her baby. I’m not giving anything away but I was very satisfied by the ending.

I absolutely loved The Familiars. It’s full of strong women. This is historical fiction at its best and I’m very much looking forward to reading more by Stacey Halls.

Stacey Halls grew up in Rossendale, Lancashire, as the daughter of market traders. She has always been fascinated by the Pendle witches. She studied journalism at the University of Central Lancashire and moved to London aged 21. She was media editor at the Bookseller and books editor at Stylist.co.uk, and has also written for Psychologies, the Independent and Fabulous magazine, where she now works as Deputy Chief Sub Editor. The Familiars is her first novel.