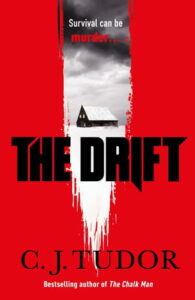 The Drift by C.J. Tudor will be published by Michael Joseph on 19th January in hardcover, eBook and audiobook. My thanks to the publishers for the proof copy.

Hannah awakens to carnage, all mangled metal and shattered glass. Evacuated from a secluded boarding school during a snowstorm, her coach careered off the road, trapping her with a handful of survivors.

Meg awakens to a gentle rocking. She’s in a cable car stranded high above snowy mountains, with five strangers and no memory of how they got on board.

Carter is gazing out of the window of an isolated ski chalet that he and his companions call home. As their generator begins to waver in the storm, the threat of something lurking in the chalet’s depths looms larger.

Outside, the storm rages. Inside each group, a killer lurks. The Drift is a story told from three viewpoints: Hannah, whose coach transporting students has crashed and is stuck in a snow drift; Meg, whose cable car is stuck in mid-air; and Carter, in a ski chalet wondering how long the generator will last. Each protagonist is with a group of people, some they know, some they don’t, and each is in danger.

The weather could be considered the fourth main character. I love books set in extreme cold weather conditions as they always make for an exhilarating and thrilling read. Each character is struggling to stay alive with a killer lurking within their group, whilst also dealing with the severe cold and snow.

I’m reluctant to go too much into the rest of the storyline but there’s an apocalyptic feel to this book, and also a rather disturbing sense of how the recent pandemic could have panned out. Whilst still a standard Tudor gripping thriller, The Drift definitely leans further into the horror genre and, I suspect because of that, it didn’t feel like it offered as much of a personal connection as her previous books. There are also some very gruesome and grizzly moments that are truly horrifying!

The Drift is a kind of thriller/horror/adventure mash-up and I found it to be edgy and compelling reading with a sense of foreboding throughout. There was a dawning realisation of how the three narratives were linked and it was really clever how the author tied them together so subtly. This is a superbly plotted book and I flew through it. Whilst I have to admit a small part of me missed the family and/or friendship element of previous novels such as The Burning Girls and The Chalk Man (everyone in The Drift is out for themselves), what is undeniable is that Tudor is an incredible storyteller and this is one twisty, fast-paced and exciting book that at times I struggled to put down.

C. J. Tudor’s love of writing, especially the dark and macabre, started young. When her peers were reading Judy Blume, she was devouring Stephen King and James Herbert.
Over the years she has had a variety of jobs, including trainee reporter, radio scriptwriter, dog walker, voiceover artist, television presenter, copywriter and, now, author.
C. J. Tudor’s first novel, The Chalk Man, was a Sunday Times bestseller and sold in over forty countries. Her second novel, The Taking of Annie Thorne, was also a Sunday Times bestseller as was her third novel, The Other People. All three books are in development for TV. Her fourth novel, The Burning Girls, was a Richard and Judy Book Club selection and has been adapted for television by award-winning screenwriter Hans Rosenfeldt (creator of The Bridge and Marcella). It will debut on Paramount Plus in 2023. The Drift is her fifth novel and has also been optioned for the screen. C.J. Tudor is also the author of A Sliver of Darkness, a collection of short stories.
She lives in Sussex with her family.
Twitter @CJTudor
Facebook @CJTudorOfficial