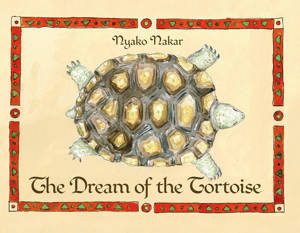 Welcome to my stop on the blog tour for The Dream of the Tortoise by Nyako Nakar. My thanks to Faye Rogers for the place on the tour and Authoright for sending me a copy of the book for review purposes.

The Dream of the Tortoise tells the story of an old tortoise who longs to be like a turtle, and have a swim in the sea before she dies. One day she meets a glow-worm who says that he will go with the tortoise to the sea. The tortoise has found a good friend in the glow-worm. When the tortoise reaches the sea she finds out that her heavy shell is no good for swimming and she is rescued by two turtles who direct her to the oldest tortoise in the world for advice. That advice suggests that the tortoise basically stops eating and eventually she becomes too small for her shell, which she manages to wriggle free from, and she achieves her wish of being able to swim in the sea.

I’m not entirely sure what to make of The Dream of the Tortoise if I’m honest. It’s a little bit philosophical in style and I think it went over my five year old son’s head. The ending was rather unexpected and I did close the book with a bit of puzzlement over it. But it’s also a sweet story of friendships, of perseverance, of nature and of achieving your goals. The illustrations are lovely and really bring the story to life. I thought it was quite heart-warming overall and it has a positive slant to it. When I was a child, I had many problems in school. I had a hard time concentrating and committing things to memory and was hyperactive – characteristics that would be recognised today as typical of someone with attention deficit hyperactivity disorder (ADHD).

I sat as far back as possible in the class and while the teacher talked and talked about things that I didn’t understand, I drew – though from a distance the teacher may have thought I was making notes on what he was saying. Quite often the teacher noticed and punished me or expelled me from class.

I had a lot of imagination and that helped me to create many different stories.

Later, after studying graphic design and working in advertising, I changed course and decided to dedicate myself to theatre and dance. I studied at the Theatre Institute of Barcelona and soon after I joined The Lindsay Kemp Company, where I worked for many years and in parallel created my own theatre company.

In the 1990’s I left the theatre and immersed myself once again in graphic design, starting to work on 3D computer design programmes.

I am also very interested in the world of meditation and healing and I travelled all over the world, getting to know other cultures and investigating Shamanism, especially in India and Mexico. I conducted many workshops in Spain on how to use silence to encourage creativity.

Today I continue to love the world of drawing and children’s stories and I have many drawings and writings to edit in the future.

Since 2017 I have lived in London and found the peace and tranquillity to work and to make my dreams come true.