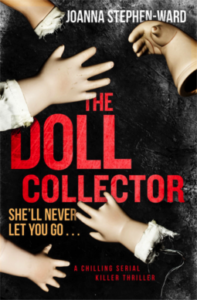 I’m delighted to be reviewing The Doll Collector by Joanna Stephen-Ward today, especially as it’s publication day. Congratulations, Joanna! My thanks to Emma Welton from Bloodhound Books for the place on the tour and the review copy via Netgalley.

A couple and their young son burn to death in a house fire.

A girl dies from a nut allergy.

A woman falls under a train during the rush hour.

An accountant falls down the steps to his basement.

Their deaths appear to be accidents but Gloria knows they were murdered because she murdered them. And every time Gloria kills she buys a doll.

But how many dolls will she need to keep her satisfied?

When Gloria takes a room as a lodger her behaviour starts to spin out of control. Gloria wants love and happiness and friendship and she will do anything she can to get what she wants…

The Doll Collector has one of those blurbs that immediately caught my attention. The idea of somebody buying a doll every time they kill someone and keeping them all together like a little family is chilling indeed. And the tagline is that this is “A chilling serial killer thriller”.

However, this book is not all that it seems. Yes, it’s about a serial killer but I didn’t find it particularly chilling. The killer is Gloria, a woman who feels like she is hard done to, who literally dislikes everyone, especially those she thinks have more than her. It’s when she takes a room as a lodger at Maurice’s house that we witness Gloria’s wickedness at its best.

This book was not what I imagined at all….in the best way. I loved every second I spent reading it. Gloria is mad, bad and very dangerous to know and I thought she was a fantastic creation. Poor Maurice got lumbered with her and he was such a nice character that I was hoping and praying he didn’t end up as the next doll on her mantelpiece.

When I say it’s not chilling, I suppose I mean it’s not scary, but it is most definitely sinister. Gloria is like a tiger getting its prey in its clutches and not letting go until it’s well and truly dead. Being able to look on whilst she did her worst made for a gripping and enthralling read.

This book also made me chuckle at times, particularly during Gloria’s exchanges with other characters, who simply can’t wait to get rid of her. And the ending was just brilliant and everything I could have hoped for. I think the author has a fantastic imagination.

The Doll Collector exceeded all my expectations. It’s different, it has some dry humour in it and I couldn’t put it down. I read about 85% of it in one sitting. I loved it.