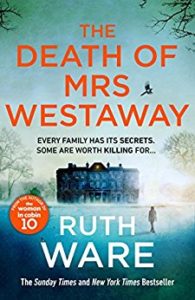 I’m reviewing The Death of Mrs Westaway by Ruth Ware today, a book I thought was fantastic. I read it through The Pigeonhole, where you get a stave sent to you every day and I was eagerly awaiting the chance to find half an hour to read it each evening. Thanks to the publishers, Harvill Secker, and The Pigeonhole for allowing me to read it.

I’ve read Ruth Ware’s first two books and whilst I enjoyed them, I think she’s gone to another level with the fantastic The Death of Mrs Westaway. Despite being set mostly in the present day, it has a very gothic feel that almost belongs in a different era. I think the author did an amazing job at creating that level of atmosphere without having to take us back to Victorian times or the 1930s/40s.

Harriet Westaway, known as Hal, reads tarot cards on Brighton Pier. She’s young and is just getting over the death of her mother, living in a small flat and owing money to the potentially violent Mr Smith. So a letter telling her that she is a beneficiary in her late grandmother’s will is very welcome, except Hal doesn’t have any family. Or does she?

Hal is a fantastic creation. She’s clever and used to telling the people she reads for exactly what they need to know. So she knows that she could possibly pull off a deception – can she pretend to be Mrs Westaway’s long lost granddaughter? She needs the money, after all.

Trepassen House in Cornwall, the home of the late Mrs Westaway, is the archetypal gothic dwelling. I could imagine creeping round it, peering into all the rooms trying to work out where I should be and getting completely lost. But the house is well past its prime and the lack of upkeep only adds to Hal’s sense of unease whilst she is there. It makes it all so much more creepy. Not to mention the housekeeper, Mrs Warren, who has her own suite of very private rooms. She’s rather unpleasant and Hal doesn’t know why she seems to have it in for her.

There’s nothing like a novel chock full of family secrets and the Westaways have plenty of them. Hal meets Harding, Abel and Ezra, the sons of the late Mrs Westaway. Can she trust any of them? Can Hal herself be trusted, given that she is trying pass herself off as somebody she is not, the daughter of the late Maud Westaway. It’s all so deliciously dark, sinister and thrilling and despite Hal’s deception I was rooting for her, hoping that she could escape Trepassen House and build a better future for herself.

I read this book in instalments and I have to say that I couldn’t wait to read the next one. It’s truly a gripping story and I didn’t see any of what happened coming. It’s full of twists and I delighted in each one. Ruth Ware has written such a compelling and addictive story and I highly recommend it. Ruth Ware grew up in Lewes, in East Sussex. After graduating from Manchester University she moved to Paris, before settling in north London. Married, with two small children, she has worked as a waitress, a bookseller, a teacher of English as a foreign language and a press officer. Her debut thriller, In a Dark, Dark Wood was a Sunday Times and New York Times Top Twenty bestseller and has been optioned by Reese Witherspoon.