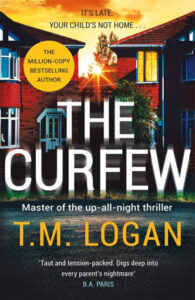 Today I’m sharing my thoughts about The Curfew by T.M. Logan. My thanks to Zaffre for the proof copy of the book. It’s available now in hardcover, eBook and audiobook.

Your son said he was home. WHY DID HE LIE?

I should have known something was wrong. I should have sensed it. Felt it in the air, like the build-up of pressure before a thunderstorm, that heavy, loaded calm.

The curfew
Andy and Laura are good parents. They tell their son Connor that he can go out with friends to celebrate completing his exams, but he must be home by midnight.

The lie
When Connor misses his curfew, it sets off a series of events that will change the lives of five families forever.

The truth?
Because five teenagers went into the woods that night, but only four came out. And telling the truth might mean losing everything… Dr Andy Boyd and his wife, Laura, have given their teenage son, Connor, a midnight curfew. He usually sticks to it but one night he doesn’t make it home in time and this triggers a week of events which prove to be a nightmare for Andy and his family. As the tagline says, five teenagers went into the woods and only four came out. What happened to the fifth person?

This is a twisty thriller with quite a few red herrings to keep me guessing. Andy and Laura do what most parents would do, they stick up for their son, and Logan creates doubt as to whether they’re doing the right thing or not. There’s a moral dilemma to consider and it made me wonder what I would do in the same situation. I also found the family dynamics intriguing, not only within Andy’s immediate family but also with his brother and nephew.

The Curfew is an easy read and my first T.M. Logan book. I’m not sure why as he writes exactly the kind of books I enjoy. I didn’t find it to be the ‘up all night thriller’ I was hoping for (very few are) but I did enjoy it and was compelled to keep reading to find out what was going to happen. I thought the plot was cleverly executed and I enjoyed all the characterisations, with a special mention for Connor’s 12 year old sister, Harriet, who was a proper little investigator who ran rings around all the grown ups. I’ll happily read more by T.M. Logan in the future (and maybe catch up with some of the ones I missed).

T.M. Logan is a Sunday Times bestseller whose thrillers have sold more than 1 million copies in the UK and are published in 18 countries around the world. The Holiday was a Richard and Judy Book Club pick and will soon be a major TV drama. Formerly a national newspaper journalist, he now writes full time and lives in Nottinghamshire with his wife and two children. Follow him on Twitter @TMLoganAuthor