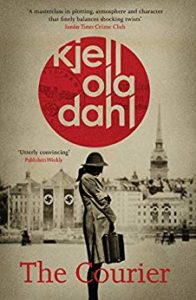 I’m so pleased to be reviewing The Courier today as part of the blog tour. My thanks to Anne Cater from Random Things Tours for the place on the tour and Orenda Books for sending me a review copy of the book.

In 1942, Jewish courier Ester is betrayed, narrowly avoiding arrest by the Gestapo. In a great haste, she escapes to Sweden, saving herself. Her family in Oslo, however, is deported to Auschwitz. In Stockholm, Ester meets the resistance hero, Gerhard Falkum, who has left his little daughter and fled both the Germans and allegations that he murdered his wife, Åse, who helped Ester get to Sweden. Their burgeoning relationship ends abruptly when Falkum dies in a fire.

And yet, twenty-five years later, Falkum shows up in Oslo. He wants to reconnect with his daughter. But where has he been, and what is the real reason for his return? Ester stumbles across information that forces her to look closely at her past, and to revisit her war-time training to stay alive…

Written with Dahl’s trademark characterization and elegant plotting, The Courier sees the hugely respected godfather of Nordic Noir at his best, as he takes on one of the most horrific periods of modern history, in an exceptional, shocking thriller.

The Courier is quite a difficult book for me to review because, to be quite honest, it’s a little out of my comfort zone, but I shall do my best.

It’s set in three different times. The book opens in 2015 when a woman named Turid spots a bracelet in a newspaper. The bracelet is up for auction but Turid recognises it and knows that it shouldn’t be for sale. Then we move back to 1942 in Oslo where we meet Ester, a Jewish courier in danger. In 1967, Turid’s father reappears. Everyone thought he had died in 1942 after being accused of killing his wife, Ester’s friend Åse, but evidently he hadn’t and in coming back to find his daughter he also causes problems for Ester.

That’s a very brief overview of what is a much more complex story. This is a literary thriller, with a setting either during wartime or when the events of the war are still seeping down over the decades. It’s tense and there’s a real sense of underlying secrets and horrors. The term ‘noir’ was made for The Courier.

Short chapters within longer sections meant that I could keep reading even when I thought I didn’t have time for any more, and it certainly kept up the pace. However, this is definitely a novel that requires concentration (for me, at least) and cannot be rushed. The writing style is beautiful and the translation by Don Bartlett is impeccable. Sometimes I think translations seem a bit stilted but not on this occasion.

The Courier is a historical, spy thriller, and a murder mystery, set in Norway and Sweden. It will appeal to those who enjoy wartime reads with a difference, not focusing on the home front or fighting, but on matters that are more behind the scenes, with a darker feel to the story. It’s absolutely full of atmosphere.