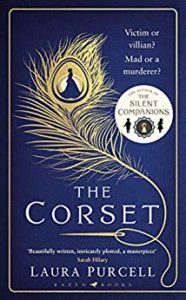 After seeing and hearing so much about this book on social media, I was so happy when The Pigeonhole announced that they were going to serialise it. My thanks to that site and the publishers, Raven Books, for the opportunity to read such a fabulous book.

Is prisoner Ruth Butterham mad or a murderer? Victim or villain?

When Dorothea’s charitable work leads her to Oakgate Prison, she is delighted with the chance to explore her fascination with phrenology and test her hypothesis that the shape of a person’s skull can cast a light on their darkest crimes. But when she meets teenage seamstress Ruth, she is faced with another theory: that it is possible to kill with a needle and thread. For Ruth attributes her crimes to a supernatural power inherent in her stitches.

The story Ruth has to tell of her deadly creations – of bitterness and betrayal, of death and dresses – will shake Dorothea’s belief in rationality, and the power of redemption.

Can Ruth be trusted? Is she mad, or a murderer?

I’m finding myself more and more drawn to Victorian Gothic fiction these days and The Corset immediately caught my eye because of the title and the cover. I’m pleased to say that the words inside utterly captivated me.

Dorothea and Ruth tell this story in their own chapters, but Ruth is the more dominant character. She’s in prison, having been found guilty of murder at just sixteen years of age. She’s surprisingly well-educated, many of her contemporaries being unable to read and write as she can. Ruth tells the story of her life and her occupation as a seamstress, and also her belief that she can inflict death on others using just her needle and thread.

Dorothea is fascinated by Ruth. She visits various offenders in prison but Ruth becomes her focus. Dorothea has a strong interest in phrenology – the idea that the shape and size of your head can show, and possibly affect, your personality and character. She uses the vulnerable people in prison as subjects to test her theories and to aid her understanding.

I found that I rather liked Ruth and felt so sorry for the way that her life turned out. Listening to the atrocities that she had to suffer in her short life was quite shocking. Dorothea is of a completely different class and has expectations placed upon her, and she has the air of a the privileged about her. I found her quite selfish and self-absorbed at times but I still liked her for her determination to throw off as many of the conventions of the time as she could.

The massive strength of this novel is never knowing if Ruth is guilty of the crimes she is accused of. Dorothea doesn’t know and neither does the reader, but I know what I wanted to believe. The two stories are weaved together perfectly and there was even more to it than I could imagine. The ending was inspired, clever and totally unexpected.

The harsh Victorian times, the smells, the atmosphere, the marked contrast between the upper and lower classes are portrayed skilfully and they make for a hard-hitting, quite graphic novel. I don’t know the author managed to think up such a darkly fabulous story but she did and it’s quite something. This is one talented author.

The Corset is just so intriguing from start to finish as we follow these two women down the paths that life has thrown them down. I found it utterly compelling.

Laura Purcell is a former bookseller and lives in Colchester with her husband and pet guinea pigs.

Her first novel for Raven Books THE SILENT COMPANIONS won the WHSmith Thumping Good Read Award 2018 and featured in both the Zoe Ball and Radio 2 Book Clubs. It will be followed by THE CORSET in September 2018.