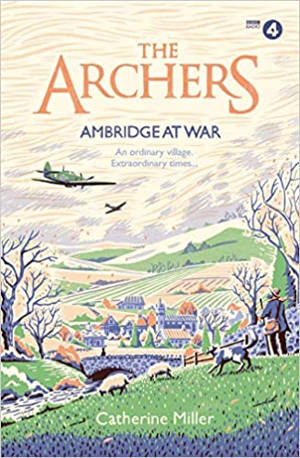 Posted on 6th November 2020 By Nicola

Welcome to my stop on the blog tour for The Archers: Ambridge at War by Catherine Miller. I’m sharing my thoughts on this lovely read today. My thanks to Simon & Schuster for sending me a gorgeous hardback copy of the book for review purposes and to Anne Cater of Random Things Tours for the place on the tour.

In this wonderful new novel celebrating the 70th anniversary of the beloved radio show, follow the lives of the families of Ambridge before it all began…

It’s 1940 and war has broken out. It is midnight at the turn of the year, and Walter Gabriel speaks the same line that opened the very first radio episode –  ‘And a Happy New Year to you all!’ For Ambridge, a village in the heart of the English countryside, this year will bring change in ways no one was expecting.

From the Pargetters at Lower Loxley to the loving, hard-working Archer family at Brookfield Farm, the war will be hard for all of them. And the New Year brings the arrival of evacuees to Ambridge, shaking things up in the close-knit rural community.

As the villagers embrace wartime spirit, the families that listeners have known and loved for generations face an uphill battle to keep their secrets hidden. Especially as someone is intent on revealing those secrets to the whole village . . .

BBC Radio 4’s The Archers has aired over 19,000 episodes since the first pilot in 1951, and has nearly 5 million regular listeners. In the quarter October – December 2019 it was also the most popular on demand radio programme on BBC Sounds. Ambridge at War takes us back to the 1940s in the village made famous by The Archers. I love books that are written as prequels to well-known and well-loved series and I also couldn’t resist what might be described as a saga as it’s a genre I love. The fact that I have never listened to The Archers did not matter a jot but I can imagine that long-term fans of the show would relish the chance to go further back and see what the village was like in the war years.

The Archer family and the Pargetter family are at the centre of the story but there are plenty of other characters playing their part alongside them. Dan and Doris Archer run Brookfield Farm and along with family difficulties Doris has to deal with the two young men who have come to help out on the farm. Meanwhile, Alec Pargetter at Lower Loxley is living quite a different life, with far fewer signs that the war is affecting him and his family, but he has his own challenges to deal with.

The central plot is one of poison pen letters, revealing the villagers’ secrets and I thought this was a brilliant plot device to also reveal them to the reader. I loved the sense of camaraderie amongst the villagers, combined with a touch of cattiness on behalf of the women and stoic friendship on behalf of the men. There are some fantastic characterisations in this novel and they really stepped off the page for me and put me right there in Borsetshire with them.

The story takes us through 1940 month by month, through love affairs, deceit, a pageant, rivalry, and loss. Quite frankly, Ambridge is a seething hotbed of gossip and I veered from wishing I lived there and feeling relieved I didn’t! Ambridge at War is such a gentle story though, and a complete delight. It’s the first in a planned trilogy and I definitely want to know what happens to the characters next. Catherine Miller is the author of 18 novels under her own name and other pseudonyms. Born to an Irish family in London, her career took her from producing radio commercials to being a voiceover agent for various stellar actors. Nowadays she writes all day at home in Surrey, occasionally lifting her head to raise her daughter and feed the dogs.