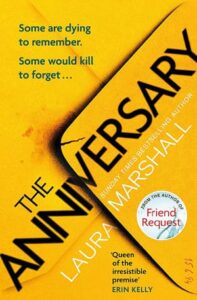 The Anniversary by Laura Marshall is published by Sphere and available now in paperback, eBook and audiobook. I won my copy in a giveaway run by the author and it’s been at the side of the bed ever since waiting patiently. Thank you, Laura!

They thought the killer had no motive. But these murders are not what they seem . . .

On 15th June 1994, Travis Green – husband, father, upstanding citizen – walked through the streets of Hartstead and killed eleven of his neighbours. The last victim was little Cassie Colman’s father.

As the twenty-five-year anniversary approaches, Cassie tries to forget the past – even as her mother struggles to remember it at all. Then something hidden in her mother’s possessions suggests the murders were not what everyone believes.

Cassie can’t stop herself from digging up the past. But someone will do anything to keep it buried . . . The Anniversary has a storyline that captured my attention straightaway. It’s 25 years since Travis Green killed 11 people from the small town of Hartshead where he lived. Cassie Colman’s father was one of the victims but as she was only 4 at the time she doesn’t really remember him. An enforced move back to Hartshead to look after her mother makes Cassie question everything she thought she knew about the tragedy and together with some new friends, including a journalist, she starts to slowly uncover new information.

I really enjoyed this book, my first by Laura Marshall. It moves along at a fast pace and keeps the momentum going. I particularly liked the way snippets about the shootings kept coming to light as Cassie found out more, and how they helped other pieces of information to suddenly slot into place or gain clarity.

Cassie is a new mother and I remember those early days with a baby who wouldn’t settle (although I don’t remember quite as many trips to the pub!). It made it very relatable and I was really pleased to see Cassie’s personal development and confidence grow throughout the story, and her relationships with her mother, her baby and her newfound friends strengthen.

Flashback scenes to the day of the shooting helped to show things from the victims’ perspective and I started to put 2 and 2 together and by the end I was beginning to get a real sense of what had motivated Travis’s rampage. A well-written and well-plotted story, with characters I wasn’t sure if Cassie could trust, I thought this was an excellent domestic thriller and I hope to read more of Marshall’s books in the future.

Laura Marshall is the bestselling author of three psychological thrillers. Her debut novel, Friend Request, was a Kindle No.1 and Sunday Times bestseller, with over half a million copies sold in the UK. Laura’s books have sold in twenty-four territories around the globe.

She grew up in Wiltshire, studied English at the University of Sussex and currently lives in Kent with her family.