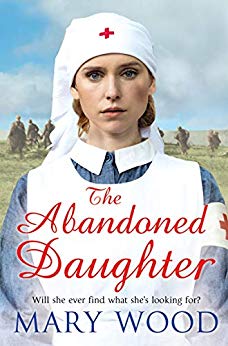 I’m always over the moon to be reading and reviewing a Mary Wood book. This time it’s The Abandoned Daughter, the second in the Girls Who Went to War series. My thanks to Mary for asking me to be a part of the tour and to Ellis Keene from Pan Macmillan for sending me a copy of the book for review purposes.

Cor blimey, Mary Wood doesn’t half like to put her characters through the wringer! From only a couple of pages in, our heroine, Ella, experiences horror after horror.

Ella is a character I first met in The Forgotten Daughter, the first book in Wood’s The Girls Who Went to War series. But whilst that book focused on Flora, this time Ella steps into the spotlight. The story begins just before the Armistice in 1918 but the hell of war is not over yet. Ella makes some new friends at the military hospital she is stationed at as a voluntary nurse, and she also meets a man who she hopes will be a big part of her future. When the war ends she thinks she will be able to move on with her life and be happy but oh no, the author has a lot more planned for our Ella.

She has to endure a lot but throughout it all there is friendship, love and hope and they keep her going. There is such a lot of warmth in Wood’s writing and the story is absolutely compelling and very hard to put down. It captures perfectly the despair and poverty that many men felt when they came home from the war, and their difficulties in adjusting back to normal life.

I’ve reviewed a few of Mary Wood’s books now and I’m running out of superlatives to use to describe her writing. She has the ability to craft stories that move me deeply and which portray the harsh realities of life and yet have that sense of hope that stops them from being depressing. For me, she’s the queen of the saga writers. I’m very much looking forward to book three, which is Mags’s story, but also the great news is that there’s a book four on the horizon too. I can’t get enough of them. Born the thirteenth child of fifteen to a middle-class mother and an East End barrow boy, Mary Wood’s family were poor, but rich in love. Over time, she developed a natural empathy with the less fortunate and is fascinated by social history. Mary raised four children and has numerous grandchildren, step-grandchildren and great-grandchildren. An avid reader, she first put pen to paper in 1989, and is now a full-time novelist.