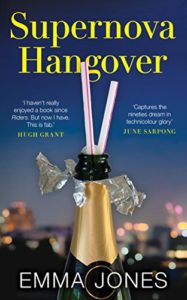 Welcome to my stop on the blog tour for Supernova Hangover. This was a book I already had on my Kindle so I was keen to take part. Thank you to Anne Cater from Random Things Tours for the place on the tour.

Toots Silver, a young, local news reporter from the North West, lands in London with little more than her ambition. Against the odds, she talks her way into a dream job at a celebrity magazine, riding high on a new craving for showbiz gossip. The shimmering nightlife of Cool Britannia lures her into an exhilarating, twilight world and an explosive affair with an A-list interviewee. But the comedown forces her to confront the soulless desires of her generation. In New York, she s on the trail of the defining exclusive of her age. But conflict erupts between personal integrity and journalistic ruthlessness which might jeopardise the success that will secure her position in a looming post-millennial world. Can you live the high-life, without it getting you down?

I think this book probably appealed to me because I remember those heady 90s days. Not that I was indulging in anything heady myself but I remember it being all around and in the press.

Toots Silver (what a fab name!) is ambitious. She wants to leave behind her northern roots and make it as a journalist in London. Somehow, she lands a plum job as editor of a magazine that thrives on celebrity gossip. But she finds herself drawn into a life that seems out of control – parties, drugs, an affair with a well known celebrity – and she starts to turn into somebody who isn’t all that nice.

Although the majority of the characters in this book are pretty unlikeable, I think Emma Jones has probably accurately portrayed the fame-hungry people very well. At times I did quite like Toots but then I would find myself seriously questioning her behaviour. At one point she’s chasing a big exclusive that would make her name and really put the magazine on the map and I was praying that she would find her integrity. I’m not telling you if she does or not, that’s for you to find out if you decide to read Supernova Hangover.

It’s clear that Jones is writing from experience. She’s captured the era and the journalist’s profession so well. Also, Toots’ need to make her mark on the world, to leave something behind as a legacy. I must admit I didn’t always find this book an easy read, and I think it’s possibly because I wanted Toots to be better, kinder. She’s a bit of a fair-weather friend to her best friend, Rachel and she sometimes uses people for her own ends.

Part of me was rooting for Toots, the other part of me didn’t like what she was becoming. This is a book which left me with mixed feelings, but overall I found much of it fascinating and engrossing, and the ending pleased me in many ways. Emma was born in 1975 and is originally from Mold, North Wales.

She is a newspaper columnist, and former editor of Smash Hits magazine.

Emma has written as a news reporter and opinion writer for the Sun, The Mail on Sunday and The Sunday Mirror, the New European and Byline. She was the youngest ever Fleet Street columnist.

Supernova Hangover is her first novel.

She lives in London with her partner, four kids and two cats.