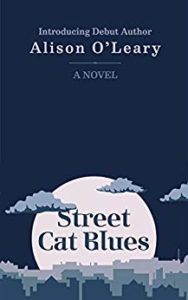 Welcome to my stop on the blog tour for Street Cat Blues by Alison O’Leary. I’ll be sharing my review of the book today and would like to thank the author for the review copy and Anne Cater of Random Things Tours for the place on the tour.

A quiet life for Aubrey?

After spending several months banged up in Sunny Banks rescue centre, Aubrey, a large tabby cat, has finally found his forever home with Molly and Jeremy Goodman, and life is looking good.

However, all that changes when a serial killer begins to target elderly victims in the neighbourhood.

Aubrey wasn’t particularly upset by the death of some of the previous victims, including Miss Jenkins whom Aubrey recalls as a vinegar-lipped bitch of an old woman who enjoyed throwing stones at cats, but Mr Telling was different.

Mr Telling was a mate…

Link to the book

I was drawn to Street Cat Blues because of its quirkiness and its cat protagonist. Aubrey is a big cat, he’s been called solid. He’s found a new home with Molly and Jeremy after being held at the ‘big house’, aka Sunny Banks rescue centre and he’d quite like to settle down, but there are a series of murders going on in his neighbourhood, the latest of which is Mr Telling, a man Aubrey used to enjoy visiting.

I’m a cat lover so I loved Aubrey. There are other cat characters in the book and, just as in humans, they’re all different and some are more likeable than others. Molly and Jeremy are lovely people but they have some ‘friends’ called Rachel and Clive who are completely obnoxious. Then there’s Maria, Mr Telling’s cleaner, and her son, Carlos. Where do they fit into the story? Aubrey does a bit of investigation and gets caught up in some of the action himself.

I have to confess, I’m not a cosy crime sort of person and that’s what this book would probably be categorised as. Having said that, I can see that this book would appeal immensely to lovers of that genre and to cat lovers too. There’s a lot of humour in it combined with such issues as illegal immigrants and, of course, murderers! I enjoyed Aubrey’s investigative skills and admired his dogged (or should that be catted?) determination to find the killer.

Street Cat Blues is an imaginative murder mystery with a fantastic main character. I can foresee more adventures and crime solving for Aubrey! Alison was born in London and spent her teenage years in Hertfordshire.

She has also lived in Somerset and Gloucestershire.

After studying Law she decided to teach rather than go into practice and for many years taught Criminal Law to adults and young people.

Since moving to the south coast, Alison has been involved in qualification and assessment development for major awarding bodies.

When not writing, she enjoys crosswords, walking by the sea and playing Scrabble on her iPad – which she always sets to beginner level because, hey, why take chances?

Alison lives with her husband John and cat Archie.