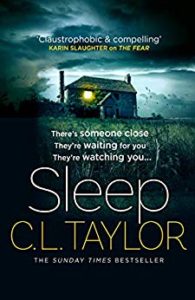 I’m delighted to be reviewing Sleep by C.L. Taylor today as part of the blog tour. My thanks to Sabah Khan from Avon Books for the place on the tour and for sending a review copy of the book.

I have always enjoyed C.L. Taylor’s writing but I think Sleep is probably my favourite of her books so far. It’s fair to say that this is not actually a sleep inducing story. In fact, I found myself staying awake that bit longer to read it.

The story begins with Anna Willis and her colleagues undertaking some training. On the way back there is a nasty accident and it obviously has a terrible effect on Anna. She finds herself struggling to sleep and struggling to adjust back to her life. To get away from it all she ends up taking a job on the Scottish island of Rum, working as a hotel receptionist/cleaner. A walking tour brings 7 guests to the island and what seemed like an idyllic escape becomes a nightmare for Anna as somebody seems to be determined to facilitate her death.

There are almost two separate stories here. I feel that Anna’s time on Rum is quite separate to the events that went before and yet they are perfectly intertwined and kept me wondering how the past was connected to the present. I absolutely loved the setting. This is not a locked room mystery but a locked island mystery as a storm means that the guests, Anna and her boss, David, are trapped together with no way across the river and no means of communication. I have a bit of a thing about islands in fiction anyway, so that aspect worked really well for me.

Knowing that Anna was sleep deprived really made me wonder if she could be trusted. Was she unreliable or was someone really out to get her. And I obviously suspected all of the guests, just as Taylor wanted me to. The denouement, when it came, was unexpected and very clever.

I thought Sleep was a very absorbing story and a very twisty one. It’s extremely atmospheric with the weather and the claustrophobia of the island being central to the plot. It’s really a fabulous psychological thriller. C.L. Taylor is the Sunday Times bestselling author of six gripping psychological thrillers. They are not a series and can be read in any order:

She has also written a Young Adult thriller, THE TREATMENT, which was published by HarperCollins HQ and is currently writing her second, which will be published in June 2020.

C.L. Taylor’s books have sold in excess of a million copies, been number one on Amazon Kindle, Kobo, iBooks and Google Play and have been translated into over 25 languages and optioned for TV. THE ESCAPE won the Dead Good Books ‘Hidden Depths’ award for the Most Unreliable Narrator. THE FEAR was shortlisted in the Hearst Big Book Awards in the ‘Pageturner’ category.

Cally Taylor was born in Worcester and spent her early years living in various army camps in the UK and Germany. She studied Psychology at the University of Northumbria and went on forge a career in instructional design and e-Learning before leaving to write full time in 2014. She lives in Bristol with her partner and young son.

Sign up to join the CL Taylor Book Club for access to news, updates and information that isn’t available on the web, as well as exclusive newsletter-only competitions and giveaways and the books that CL Taylor thinks will be the next big thing. You will also receive THE LODGER for free when you sign up.