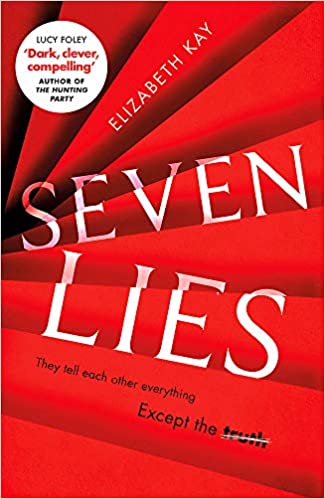 Today’s review is of Seven Lies by Elizabeth Kay. This is a book I was really excited about and I wasn’t disappointed. My thanks to Gemma Shelley from Sphere/Little Brown for my fabulously jazzy tabbed proof copy for review purposes. It’s available now in ebook and from Thursday in hardcover.

It all started with one little lie…

Jane and Marnie have been inseparable since they were eleven years old. They have a lot in common. In their early twenties they both fell in love and married handsome young men.

But Jane never liked Marnie’s husband. He was always so loud and obnoxious, so much larger than life. Which is rather ironic now, of course.

Because if Jane had been honest – if she hadn’t lied – then perhaps her best friend’s husband might still be alive . . .

This is Jane’s opportunity to tell the truth, the question is:
Do you believe her? A book about lies? With an unreliable narrator? Count me in!

Jane Black is the narrator of Seven Lies. This is a story of female friendship, of being needed by a contemporary when family seem absorbed elsewhere, and of the strength of that kind of relationship. Jane and Marnie have been friends since they were at school and have been through thick and thin together. Jane has rather a lot of trouble dealing with any situation where Marnie’s full gaze isn’t on her though.

This is such a riveting read and so completely not what I expected. I was thinking fast-paced thriller when in fact this is much more of a literary thriller, one in which the reader is fed titbits by Jane as the story unfolds. Whilst it’s a relatively slow build up, I found that all of a sudden I couldn’t put this book down. As you might expect, there are seven lies and I thought it was fabulous plotting by the author to bring them all into Jane’s narrative at just the right times.

I veered between feeling extremely uneasy about Jane and her actions and reactions, and feeling rather sorry for her. I think she’s one of those people who has high expectations and a yearning within her for more than she’s probably ever going to have, and although some people would cope better with what life has thrown at her, she just clings onto Marnie even more. Whilst not obviously chilling due to Jane’s matter of fact delivery, when I look back I’m more than a little bit freaked out by her and the ending was brilliant. I approached it with a shocked look on my face!

Seven Lies is a fabulous debut. It’s intense and gripping, and it made me feel as though I was Jane’s personal confidante. I feel like I shouldn’t say it but I loved her tone. I’ll be looking out for Elizabeth Kay’s second book.

Elizabeth Kay started her career as an assistant at Penguin Random House. She is now a senior commissioning editor there and is simultaneously pursuing her passion for writing.

She won first prize – in a short story competition judged by Jacqueline Wilson – aged eight, and has been writing ever since. Her debut novel, Seven Lies, is due be published some years later, in 2020.