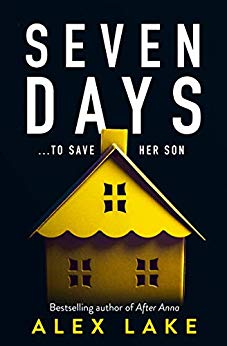 Wowee, this book is just amazing. I can’t recommend it highly enough. My thanks to Felicity Denham of Harper Collins for the fabulous proof copy for review purposes.

This book is absolutely fantastic, one of my books of the year for sure. It has everything going on in it and is so much more than I could ever have imagined.

The present day narrative looks at Maggie, a woman in her late 20s waiting for her son, Max, to turn three. That will happen in seven days. Far from a normal situation, however, Maggie has been held captive for the last twelve years and she knows from bitter experience that when her children reach the age of three they will be taken from her.

It’s such an unusual and innovative story but, if I’m completely honest, before I started reading I wasn’t entirely sure whether it would be for me. Wrong! It was absolutely for me and it was a book that had me gripped from beginning to end.

Whilst following Maggie and Max as they hurtle towards that all important third birthday, we also see how she was taken in the first place and what has happened to her over the length of her captivity, along with seeing the effect of her loss on her parents and her younger brother. As you can imagine, it’s shaped the whole of the rest of their lives.

I was desperately hoping Maggie would find a way to foil her captor and save Max from whatever his fate might be. While I waited to see what would happen I could feel the mounting tension which built up into a heart-poundingly exciting conclusion. I also cried at the end and this book had a depth of emotion that I didn’t expect.

I had to break off half way through to read some other books I had committed to and I have to be honest and say I just wanted to get back to Seven Days. It thrilled me, it shocked me, it’s full of tension and yet it’s also so moving and so full of feeling. Ultimately it’s about a mother’s love and what she will do for her son. I thought it was brilliant, the writing perfectly pitched. Fabulous in every way!

Alex Lake is the pseudonym of a British novelist whose first book was one of Amazon UK’s top ten debuts of 2012. Alex was born in the North West of England in the 1970s and now lives in the North East of the US.