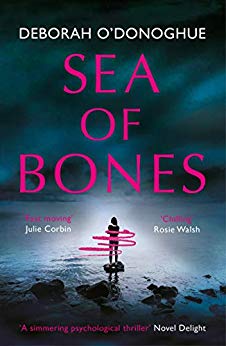 I’m delighted to welcome you to my stop on the blog tour for Sea of Bones by Deborah O’Donoghue today. This is such a good psychological thriller. My thanks to Lucy Chamberlain from Legend for the place on the tour and for sending a copy of the book for review purposes.

Juliet is used to wielding power and influence in her line of work, but when her beloved niece dies, she finds herself powerless in the face of her grief and has doubts over the coroner’s report of suicide.

She travels back to her family’s remote coastal home where Beth was found. As Juliet delves deeper into the investigation, her personal and professional lives collide and she unwittingly finds herself pitted against dangerous opposition who seem intent on silencing her.

In order to expose the truth behind her niece’s death, Juliet must face the fact that nobody in her life is who she previously thought them to be – including herself.

Do you know, this book particularly appealed to me because of the Moray setting in the Scotland and the remote coastal home mentioned in the blurb. The story itself intrigued me but it was definitely the setting that got me interested. But my goodness, this is a book that has so much more going on than I could have ever imagined and I found it difficult to put down.

Juliet MacGillivray is a member of the Progressive Alliance, a political party. A scandal occurs within the party at a point when Juliet is grieving for her niece, Beth. As Juliet doesn’t trust the verdict of suicide that the coroner gave she travels to her family’s remote summerhouse to do some digging around.

I’m a little unsure how much more to say about the plot as nothing more is given away in the blurb but the people Juliet meets in that remote place are pivotal to the story as they lead her down a path that threatens to blow apart organised crime and a massive cover up from those in power. I was actually reminded of a Line of Duty plotline which made this book even more exciting for me. Don’t get me wrong, this is nothing to do with anti-corruption but it’s very topical and looks at bribery and control from the bottom of the chain right to the very top.

The story starts fairly slowly, the pace then increases and eventually it builds into a crescendo. There’s so much for Juliet to discover. Her partner, Declan, gets involved too and things get pretty hairy for both of them. They had no idea what they were getting into and how dangerous it could get. By the end they definitely knew!

This is a story that is very much about the seedy underbelly of life, those things that we don’t like to think about and in a way can’t believe actually happen, and yet there they are going on right under our noses. This is a psychological thriller that is brimming with tension and has more layers than an onion. Each time Juliet and Declan peeled back a layer it surprised me and I found it both shocking and exciting. And the ending is chilling and open for a possible sequel. For a debut novel this is so so good. I’d definitely read more by Deborah O’Donoghue. Deborah studied English and French at the University of Sussex, and Performing Arts at the Sorbonne, before teaching for ten years. She has also worked in car body repairs, in the best fish and chip shop in Brighton, and as a gopher in a comedy club.