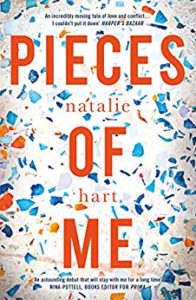 Emma did not go to war looking for love, but Adam is unlike any other.

Under the secret shadow of trauma, Emma decides to leave Iraq and joins Adam to settle in Colorado. But isolation and fear find her, once again, when Adam is re-deployed. Torn between a deep fear for Adam’s safety and a desire to be back there herself, Emma copes by throwing herself into a new role mentoring an Iraqi refugee family.

But when Adam comes home, he brings the conflict back with him. Emma had considered the possibility that her husband might not come home from war. She had not considered that he might return a stranger.

Pieces of Me is an unusual and very moving story. Emma is a civilian, working in Iraq helping Iraqis to obtain visas to enable them to go to the USA, when she meets Adam, a Special Forces soldier. They embark upon a relationship and eventually Emma leaves Iraq and moves to Colorado, where the forces live during post-deployment. Adam is deployed again and Emma is left behind, not knowing whether she can ever belong in this new life. When Adam then returns home, he is a different man, his experiences having changed him, possibly forever.

This is a very potted version of what is actually a multi-layered and complex story. It’s told in three sections: Pre-Deployment, Deployment and Post-Deployment. The first covers Emma’s time in Iraq. She loves her role there, despite being in the middle of a war zone, but she’s also dealing with fragments of her past that won’t let her go. I really enjoyed this section as I felt that somehow Emma was most herself during this time in Iraq. The second and third sections are difficult to read in different ways. Living through deployment is incredibly hard for both Emma and Adam, but she hadn’t prepared herself for the fact that post-deployment might in fact be even harder.

The writing is beautiful, raw and pared back, and also almost poetic at times. As Adam’s deployment draws near and Emma has to contemplate months not only without him, but of not knowing if he will return safely, she thinks:

The deployment date sits between us like a giant hourglass, our moments slipping through its sweeping glass curves. We navigate our way around it to reach each other.

The title of this book is clever. Emma collects fragments of stone, glass and rock, and remembers where she picked each one up and what the place or time meant to her. Each piece is a part of her, and perhaps only by putting all the pieces together can she make herself whole.

Pieces of Me is a love story, a war story, a story of feeling like you don’t belong, a story of loss. The detail in this novel is immense and absolutely fascinating. I could tell it was written, not by someone who had done a huge amount of research, but by someone who had experienced the place and the emotions firsthand. Natalie Hart writes with such empathy, such feeling, that I read many of the pages with a lump in my throat, not to mention the tears in my eyes as I read the final chapter.

It’s a triumph of a novel. The backdrop of the Iraq war made for compelling reading and, to be honest, Emma and Adam’s story nearly broke me. It’s just so heartfelt and devastating. It’s quite beautiful. Natalie Hart is a writer, researcher and communications adviser, specialising in conflict and post-conflict environments. She has worked extensively across the Middle East and North Africa, including three years in Iraq where Pieces of Me is set. Natalie has a BA in Combined Middle Eastern Studies (Arabic and Spanish) from the University of Cambridge and an MA in Creative Writing from Lancaster University.