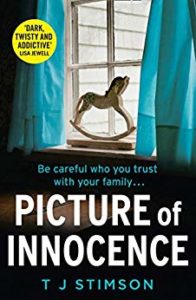 Welcome to my stop on the blog tour for Picture of Innocence by T J Stimson. My thanks to Sabah Khan from Avon Books for the place on the tour and the review copy of the book.

The nature/nurture debate is an interesting one, isn’t it? Can someone simply be born bad or are they a product of their upbringing and their surroundings? Picture of Innocence addresses that question, along with asking how you can keep your children safe if you barely even trust yourself.

Maddie is our central character. She’s married to Lucas and has three children, Emily, Jacob and Noah. Noah is only 10 weeks old and was a bit unexpected, especially given the fact that Jacob is only 2. After suffering from post-natal depression after Jacob’s birth, Maddie is understandably concerned about having another baby so soon after, and so is Lucas. She’s also trying to run an animal sanctuary that is drowning in debt so she’s under a lot of pressure.

The first bit of the book is scene-setting but then wham bam, there’s a tragedy in the family and everybody is a suspect. Maddie herself seems the obvious choice, but then what about Lucas? And extended family and friends? Maddie doesn’t know who she can trust anymore. It blows her world apart.

This is such a gripping, fast-paced book. I just couldn’t put it down and read it, all 404 pages, within a day. I suspected everyone, just like Maddie did. Intertwined with the main story is that of a young girl, mistreated from childhood and I thought this strand of the story was brilliantly executed to keep me guessing.

Picture of Innocence isn’t an easy book to read in terms of subject matter. It’s quite distressing a storyline, in fact both strands are disturbing. But it’s absolutely compelling reading and just when I thought I had got a handle on what was happening, Stimson threw another curveball at me, sending me down another path.

I believe this is this established women’s fiction author’s first foray into psychological thrillers and what a way to begin. It’s a chilling read, one that makes you think about how well you know people. I thought it was fantastic. Tess Stimson is the British author of ten novels, including top-ten bestseller The Adultery Club, and two non-fiction books, which between them have been translated into dozens of languages.

Her first “proper” job after graduating from St Hilda’s College, Oxford (where she read English) was as a news trainee with ITN (Independent Television News). She reported and produced regional and world stories, travelling to hotspots and war-zones all over the globe.

In 2002, she was appointed Professor of Creative Writing at the University of South Florida and moved to the US. She now lives and works in Vermont with her husband, Erik, their three children, and (at the last count) two cats, three fish, one gerbil and a large number of bats in the attic.