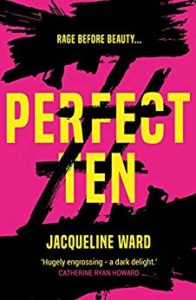 Once again, I’m delighted to be sharing my review of a book that I read via The Pigeonhole, Perfect Ten by Jacqueline Ward. My thanks to that site and Corvus Books for the opportunity to read it. I wonder if anyone else had Perfect Ten by Beautiful South going round their head all the time they were reading it!

Caroline Atkinson is powerless and angry. She has lost more than most – her marriage, her reputation, even her children. Then one day, she receives an unusual delivery: lost luggage belonging to the very man who is responsible, her estranged husband Jack.

In a leather holdall, Caroline unearths a dark secret, one that finally confirms her worst suspicions. Jack has kept a detailed diary of all his affairs; every name, every meeting, every lie is recorded. He even marks the women out of ten.

Caroline decides it’s time to even the score. She will make this man pay, even if it means risking everything…

Perfect Ten is one of those books that was on my radar and was attracting my attention all over social media so I couldn’t wait to read it. I was not disappointed! It’s such a fantastic story of revenge, one of the best I’ve read actually.

I was cringing all the way through. Surely that’s not a good thing, you’re probably thinking, but it was the main character’s behaviour I was cringing over. Caroline Atkinson is a fantastic creation – a psychologist so fully aware of the way people’s minds work, but also unhinged by the way her ex-husband, Jack, treated her.

Jack gaslighted her. That means he manipulated her psychologically into doubting the sanity of her own mind. He caused her to lose her children and become an alcoholic hoarder who sleeps around. Hmm, what a great guy! When some of Jack’s things are delivered to her address by mistake she finds a journal in which he details every woman he’s slept with and gives them marks out of ten. Caroline uses the contents of the journal to launch a social media campaign, not just against Jack but against the women he slept with too, who most definitely knew that Jack had a wife.

This book is utterly addictive. I read it a stave a day through The Pigeonhole and I couldn’t wait to find out what Caroline would do next. Some of it was read through my fingers as she does some quite shocking things in her mission for revenge. But honestly, when you’ve had your life ruined by a manipulative control freak, what have you got to lose? I was most definitely #teamcaro throughout and just hoped that she wouldn’t jeopardise getting her kids back one day.

This is such a clever book too. I don’t know how the author kept up with the plot but she did a brilliant job of pulling it all together and staying on top of Caroline’s exploits. It’s dark, disturbing, thrilling, exciting and, despite everything that happened, moving – I felt a tear emerge from my eye at the outcome. I absolutely loved every minute I spent reading it.

She is represented by Judith Murray at Green & Heaton. For more information about Jacqueline and her work go to www.jacquelineward.co.uk

Jacqueline is also the author of the DS Jan Pearce crime fiction series Random Acts of Unkindness, Playlist for a Paper Angel and What I Left Behind, and SmartYellowTM, in the pen name of J A Christy.