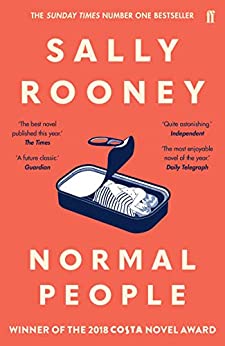 I’m finally getting round to sharing my thoughts on Normal People by Sally Rooney. I read this book back in April but I’ve waited until now to review it because I wanted to watch the television adaptation and contrast and compare. The copy of the book is my own.

Connell and Marianne grow up in the same small town in the west of Ireland, but the similarities end there. In school, Connell is popular and well-liked, while Marianne is a loner. But when the two strike up a conversation – awkward but electrifying – something life-changing begins.

Normal People is a story of mutual fascination, friendship and love. It takes us from that first conversation to the years beyond, in the company of two people who try to stay apart but find they can’t. This is a beautiful story of Marianne and Connell who meet at school in Ireland. Marianne is bolshy, fierce, yet oh so vulnerable and at times naïve. She’s essentially broken in many ways, not least because of her family. When they initially spend time together Connell is the popular guy at school and Marianne is the misfit. What’s interesting as the book progresses is the way their roles reverse, especially when they go to Trinity College in Dublin. The power in the relationship switches between them more than once.

Make no mistake about it, this is a love story but it’s a problematic one. No two characters need their heads banging together more than these two. And yet it’s so achingly moving and tender it struck right at the heart of me. I’m a sucker for a story about star-crossed lovers and characters who are drawn to each other despite all the odds. It feels like Marianne and Connell are attached by invisible elastic which, no matter what, brings them back to each other.

I admit that when I got to the end of the book I felt disappointed. I wanted a different ending for these characters I had become so invested in. But having thought about it since, and having seen the adaptation, I think it’s probably the only ending that would have worked. Where I initially wanted to stamp my feet at the ending, I’m now sagely nodding my head.

Most book lovers prefer the book to the film or TV version, me included. Having now worked my way through the series I have to say that I have rarely seen a more perfect adaptation. Little has been changed from the book and what has works beautifully. The acting is spot on and I honestly don’t think any other actors could have played Marianne and Connell better or more sympathetically. Their portrayal is stunning and the whole series has a mesmerising cinematic feel to it that had me spellbound.

Normal People is a very special story. It’s about peer pressure, fitting in, family, being a student, being a son or daughter, but above all else it’s about love. Pure and simple love. It’s wonderful.

Sally Rooney was born in County Mayo and lives in Dublin. Her writing has appeared in The New Yorker, The New York Times and The London Review of Books. She is the author of Conversations with Friends and winner of the Sunday Times/PFD Young Writer Award 2017. Her second novel Normal People was published in 2018 and longlisted for the Man Booker Prize. She is the editor of the biannual Dublin literary magazine The Stinging Fly.