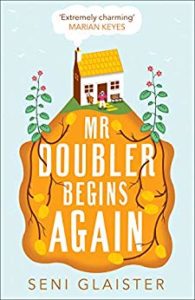 I’m delighted to be reviewing Mr Doubler Begins Again by Seni Glaister today. It’s a truly lovely book. My thanks to Izzy Smith from HQ Stories for sending me a copy of the book for review purposes.

Baked, mashed, boiled or fried, Mr Doubler knows his potatoes. But the same can’t be said for people. Since he lost his wife, he’s been on his own at Mirth Farm – and that suits Doubler just fine. Crowds are for other people; the only company he needs are his potato plants and his housekeeper, Mrs Millwood, who visits every day.

So when Mrs Millwood is taken ill, it ruins everything – and Mr Doubler begins to worry that he might have lost his way. But could the kindness of strangers be enough to bring him down from the hill? Mr Doubler Begins Again is one of those delightfully quirky stories, one that made me smile a lot.

Doubler, of the title, is a potato farmer and proud of it. Living at Mirth Farm, the land around him is being bought up by another potato farmer, Peele, and he wants Doubler’s land. But Doubler is happy in his solitude and his museum piece home. Ok, he doesn’t leave the place, not ever, and his only companion is Mrs Millwood, his cleaner, but he’s happy enough.

One of the greatest pleasures in this book are the conversations and ruminations between Doubler and Mrs Millwood. Whilst he looks down on her inferior lunch, he tries to educate her as to why her apple is the wrong variety, why her sandwich isn’t right. But don’t start thinking Doubler is one of those irritating people who just like to be superior, he genuinely believes he is correct and simply wants to pass on that knowledge to others to make them appreciate their food (or gin, or whatever else it might be) more. He knows his limitations and only holds forth on those subjects he knows about. You can’t really say fairer than that, can you?

The characters in this book are what make it special for me. I loved Doubler, a kinder and fairer man you couldn’t find. Mrs Millwood and her daughter are just fabulous and the other people that Doubler meets as he begins again are quite the cast of characters. For Mrs Millwood falls ill and is unable to make the trip to the farm and for the first time in many years Doubler has to venture out, talk to others, realise that there is a world beyond his farm.

Just as I loved these characters, I loathed his son, Julian, and didn’t care much for his daughter, Camilla. As with most families, there’s background but they’re blinkered as to Doubler’s abilities as a father.

Plot-wise it really is all about Doubler’s second chance in life. I found myself thinking of Harold Fry when I was reading this book and the whole idea of getting to that point in your life where you look back and wonder if this was really how you wanted it to turn out. In changing his own life he also brings changes to others and that was really so heartwarming to read.

Seni Glaister’s writing is beautiful, so lyrical, so thoughtful and so deep sometimes. I could highlight any number of passages ranging from the ripeness of bananas to the likening of marriage to a hand-knitted blanket. I feel like every single word matters in this book.

I thought Mr Doubler Begins Again was an absolutely lovely story of friendship, of new beginnings and potatoes!

And if you’re interested in those passages I mentioned above, here they are: The undeniable truth about bananas. Seni Glaister worked as a bookseller for much of her career before founding WeFiFo in 2016. Her first novel, The Museum of Things Left Behind was published in 2015.