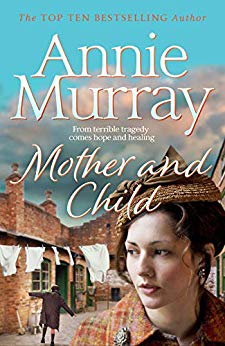 Posted on 9th November 2019 By Nicola

I’m pleased to be reviewing Mother and Child by Annie Murray today, a book with an important theme. My thanks to Pan Macmillan for the copy of the book for review purposes and to Kelly Lacey from Love Books Tours for the place on the tour.

Mother and Child by Sunday Times bestseller Annie Murray is a moving story of loss, friendship and hope over two generations . . .

Jo and Ian’s marriage is hanging by a thread. One night almost two years ago, their only child, Paul, died in an accident that should never have happened. They have recently moved to a new area of Birmingham, to be near Ian’s mother Dorrie who is increasingly frail. As Jo spends more time with her mother-in-law, she suspects Dorrie wants to unburden herself of a secret that has cast a long shadow over her family.
Haunted by the death of her son, Jo catches a glimpse of a young boy in a magazine who resembles Paul. Reading the article, she learns of a tragedy in India . . . But it moves her so deeply, she is inspired to embark on a trip where she will learn about unimaginable pain and suffering.
As Jo learns more, she is determined to do her own small bit to help. With the help of new friends, Jo learns that from loss and grief, there is hope and healing in her future.

A word from Annie Murray Soon after midnight on the morning of December 3rd, 1984, what is still recognized as the world’s worst ever industrial disaster took place in the city of Bhopal in central India.

A plant built to manufacture pesticide, owned by the American Union Carbide Corporation, leaked 40 tons of methyl-isocyanate gas, one of the most lethally toxic gases in the industry, over the surrounding neighbourhood. This was a poor area consisting mainly of slum housing, some of it leaning right up against the factory wall.

People woke, coughing and choking. Panic broke out as many tried to flee for their lives. As they ran, their bodies broke down with toxic poisoning, eyes burning, frothing at the mouth. Women miscarried pregnancies. Many people flung themselves in the river and by dawn, the streets were littered with thousands of bodies. It is estimated that 10,000 died that first night and the death toll continued, within weeks, to a total of about 25 000. Many more have died since. There are still reckoned to be 150 000 chronically ill survivors. Their plight was not helped by the fact that Union Carbide would not release the name of an antidote to a poison that they did not want to admit was as dangerous as it really was.
The plant, making less profit than had been hoped, was being run down for closure and was in poor condition. Not one of the safety systems was working satisfactorily. In addition, the original design of the factory had been ‘Indianized’ – in other words built more cheaply than would be expected of such a plant in a western country.

This was 35 years ago. In 1989, a paltry amount of compensation was eventually paid by Union Carbide who did everything a large corporation can do to evade taking responsibility. Their comment was “$500 is about enough for an Indian.” That was $500 to last for the rest of the life of a man who could no longer work to look after his family.

The sickness and suffering from ‘that night’ goes on in those who survived to this day. What is less well known about Bhopal however, is that even before the 1984 gas leak, the company had been dumping toxic waste in solar evaporation ponds. The lining used was about like you would use in a garden water feature. This in a country of heavy rains and floods. In the early 80s, people started to notice how bad their water supply tasted. Cows were dying.

Union Carbide closed the plant. They never cleared the site, which still stands in an area of highly toxic soil and water. The water supply in that area is so contaminated that water has to be brought in from outside. In 2001 Union Carbide was bought by the Dow Chemical Company, and is, from 2018, now DowDuPont. Despite having acquired all the assets of Union Carbide they are not prepared to accept its liabilities and clear up the site.

In the months after the gas leak in 1984, the nearby Hamidia hospital started to see children born with birth defects more horrific than any they had witnessed before. These days, because of gas- and also water-affected parents, the rate of birth defects is now reaching into a third, soon to be a fourth generation. The main parallel with the kind of extreme toxic effects would be with the children of Agent Orange in Vietnam.

The only free care in this impoverished neighbourhood for people suffering from the effects of gas poisoning, or to help with very severely handicapped children, is from the Bhopal Medical Appeal. It is to them that all the money from Mother and Child is going.

In the book, you can read more about what happened in Bhopal and about how the book itself came to be written.

I must admit I wasn’t sure what to expect from this book. The cover led me to think it’s set in the past but it’s clear from the blurb that it’s actually a modern story. I think this is a result of the author wanting to write about a specific subject, that subject being the Bhopal disaster in India, the world’s worst industrial disaster and one whose effects are still being seen 35 years on.

The main story is that of Jo and Ian. They were a solid couple until the death of their grown up son, Paul, in an accident. Now they’re cast adrift from each other, unable to cope with their grief together or apart. One day in the dentist’s waiting room Jo reads a magazine and sees a photo of a boy who reminds her in some way of Paul. The boy has been affected by Bhopal and it leads Jo to look into the tragedy. It’s her saviour actually, giving her something to work for, something to care about in the aftermath of her own tragedy.

There’s also a thread running through the story about Dorrie, Ian’s mother, who has been keeping difficult times in her past to herself. Suddenly she starts to confide in Jo by asking her to read a memoir of sorts. Whilst these sections were nice to read I wasn’t sure what they added to the story until quite near the end when a comparison is drawn between Dorrie and the women in Bhopal.

I thought this was a really uplifting story in many ways. Despite dealing with various horrific events, there is a sense of rebirth and learning to live with the past. Jo goes through so much even during the course of this story and I really enjoyed how she made new friends who supported her and helped her through a difficult time.

Murray’s writing is engaging and very easy to read. It’s a wonderful thing she has done writing this book as the proceeds of sale will raise money to help the survivors of Bhopal. I’m not sure I had heard of the disaster before but it’s truly horrendous, not only that it happened but that the site has never been cleared and so the poison is still being fed through to the people.

Mother and Child is a moving work of fiction with a strong basis in reality and I really enjoyed reading it. Annie Murray was born in Berkshire and read English at St John’s College, Oxford. Her first ‘Birmingham’ novel, Birmingham Rose, hit The Times bestseller list when it was published in 1995. She has subsequently written many other successful novels, including The Bells of Bournville Green, sequel to the bestselling Chocolate Girls, and A Hopscotch Summer. Annie has four children and lives near Reading.