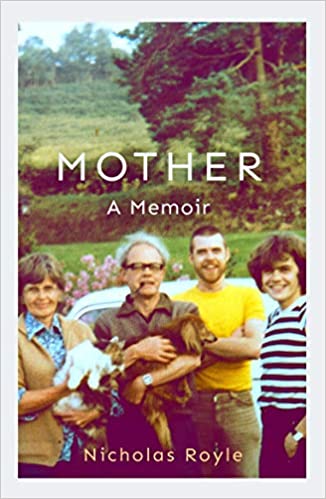 My review today is of Mother: A Memoir by Nicholas Royle. My thanks to Emma Dowson and Myriad Editions for the review copy of the book.

Before the devastating ‘loss of her marbles’, Mrs Royle, a nurse by profession, is a marvellously no-nonsense character, an autodidact who reads widely and voraciously, swears at her fox-hunting neighbours, and instils in the young Nick a love of literature and of wildlife that will form his character and his career.
In this touching, funny and beautifully written portrait of family life, mother-son relationships and bereavement, Nicholas Royle captures the spirit of post-war parenting as well as of his mother, whose dementia and death were triggered by the tragedy of losing her other son—Royle’s younger brother—to cancer in his twenties.

At once poetic and philosophical, this extraordinary memoir is also a powerful reflection on climate crisis and ‘mother nature’, on literature and life writing, on human and non-human animals, and on the links between the maternal and memory itself. Mother: A Memoir is a book that immediately intrigued me. I love to read stories of ‘ordinary’ people, who often have lived the most interesting of lives.

Nicholas Royle writes of his mother primarily. It is around her that most of his narrative revolves. But he also writes of family life, both immediate (his parents, himself and his younger brother) and a little wider (aunts, cousins, grandparents and so on). It is the devastating ‘loss of her marbles’ that starts Nicholas’s remembrances of his mother, and from there we hear about her younger life, working life, married life, and family life.

Royle himself says that the memoir ‘makes no pretence at being comprehensive, chronological or orderly’ and it definitely is a series of random snapshots and memories of his mother at various times. This works fine for me as I rather enjoy reading in a non-linear fashion but it won’t suit readers who like to read in chronological order. Royle’s writing style is very poetic in style, maybe a little too much for my personal tastes. He’s a Professor of English so way above my intellectual level, but I cannot deny that his writing is graceful and sensitive.

What shines through is his immense love for his mother, the way she cared for him, indulged him and his brother in whatever they wanted to do. Alzheimer’s robbed not only Kathleen of her marbles but also Royle of the mother he knew and the reader cannot help but empathise. I very much enjoyed the photographs interspersed throughout the book which, although the narrative would have managed fine without them, did complement the author’s account perfectly.

Mother: A Memoir is a moving and thoughtful read of the love of a son for his mother and his lifelong respect for her.

Nicholas Royle is Professor of English at the University of Sussex, where he established the MA in Creative and Critical Writing in 2002. He is the author of two novels, both published by Myriad—Quilt and An English Guide to Birdwatching—and many other books, including studies of Elizabeth Bowen, Hélène Cixous, Jacques Derrida, E. M. Forster and Shakespeare. His books about literature and critical theory are widely influential and have won considerable acclaim. They include The Uncanny (2003), Veering: A Theory of Literature (2011), and An Introduction to Literature, Criticism and Theory (fifth edition, 2016, with Andrew Bennett).