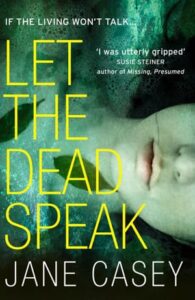 Let the Dead Speak by Jane Casey is published by Harper Collins in paperback, eBook and audiobook.

A murder without a body
Eighteen-year-old Chloe Emery returns to her West London home one day to find the house covered in blood and Kate, her mother, gone. All the signs point to murder.

A girl too scared to talk
Maeve Kerrigan is determined to prove she s up to her new role as detective sergeant. She suspects Chloe is hiding something, but getting her to open up is impossible.

A detective with everything to prove
No one on the street is above suspicion. All Maeve needs is one person to talk, but that s not going to happen. Because even in a case of murder, some secrets are too terrible to share… Five years ago, when I read book six in the Maeve Kerrigan series, I confidently stated that this was a series I had managed to keep up with. Famous last words as I’ve only just got around to reading book seven, Let the Dead Speak, and I do wish I’d got to it sooner. As always, it was great to be back with Maeve and DI Josh Derwent (in my opinion one of the best creations in fiction).

Events from the earlier books are hinted at and I would have loved some kind of recap as things were hazily coming back to me. However, this book can be read as a standalone (although you would miss the background between Maeve and Josh). Maeve has had a promotion to DS and with it comes a greater confidence in her abilities. When a woman goes missing, her house covered in her blood, the team have to try and not only find out what happened but where she is as well. This leads to a number of suspects in the same street and it’s not a straightforward case by any means.

I found this to be a fast-paced crime thriller that really kept me turning the pages. The strength of the series as a whole is the dynamic between Kerrigan and Derwent and it’s here in abundance once again, albeit with a change in circumstances for Derwent which seems to have softened his edges somewhat. There is also a complex and intriguing plot which gives Maeve a chance to step forward and shine. This is not my favourite of the series so far but I enjoyed it very much indeed and hope not to leave it quite so long before I catch up with the next instalment.

Jane Casey is no stranger to the crime world. Married to a criminal barrister, she s got the inside track on some of the country s most dangerous offenders, giving her writing an unsettlingly realistic feel.

This authenticity has made her novels international bestsellers and critical successes. They have been nominated for several awards and in 2015 Jane won both the Mary Higgins Clark Award and Irish Crime Novel of the Year for The Stranger You Know and After the Fire, respectively. She is also an active member of Killer Women, a London-based group of crime writers.

Born in Dublin, Jane now lives in southwest London with her husband and two children.