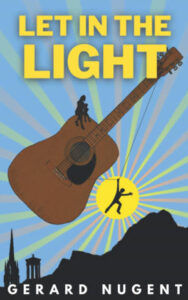 ShortBookandScribes #BookReview – Let in the Light by Gerard Nugent

My review today is of Let in the Light by Gerard Nugent, a book I enjoyed very much. My thanks to the author for the review copy of the book. All profits from the book go to Health in Mind – a charity that campaigns for better mental health and wellbeing.

After stumbling into the limelight five years ago, he soon found himself crashing back out of it. Now, he spends his days working in a small music shop in Edinburgh, attempting to live a quiet life as a part-time dad.

But his 15 minutes of fame have taken its toll. His inspiration for songwriting, music and life in general seems to have all but disappeared.

When Richie is given a flyer advertising the first meeting of the Hope Street Songwriters’ Circle, it’s a chance to step back into the world. But after years of hiding away, letting in the light won’t be easy. Let in the Light appealed to me as soon as I read the blurb. It’s billed as a feelgood story about love and music and that’s exactly what it is.

This is the story of Richie Carlisle. The first half or so of the book is told in alternating ‘now’ and ‘then’ chapters. Now Richie is working in a music shop in Edinburgh, living apart from his ex-partner and his son and generally drifting through life whilst still trying to deal with what happened to him five years earlier when he found himself becoming well known for all the wrong reasons, something that changed his life completely.

This is such a lovely read. It’s uplifting and yes, feelgood, but it’s also really poignant and moving at times. I loved Richie and was absolutely rooting for him all the way through. I wanted him to get over what happened and get back on his feet. It’s a story that highlights how powerful music can be, and how much it reminds you of events in your life, whether good or bad. What happened to Richie is skilfully drip-fed by the author, tying together his current decisions and situation with the way things panned out back then.

I loved the beginning of the book when Richie is still unknown, singing in an Edinburgh pub, and meeting Pen, his partner, for the first time. In fact, there are so many memorable parts for me: Richie’s experiences in the music industry; his friendship with Frank, the manager of the music shop; his relationship with his parents and his son, Finn; his time playing at the Friday Night Jukebox at the Flying Swan; and attending the Hope Street Songwriters’ Circle and maybe finding a way to fully live his life again. I was thoroughly hooked and engrossed. I’ve also now found a new favourite song – Better Be Home Soon by Crowded House (you’ll have to read the book to find out its significance).

Let in the Light is a gorgeous debut novel from Gerard Nugent and it will appeal to fans of Andy Jones and Mike Gayle. It’s a beautifully written story of leaving the darkness behind and stepping back into the light.

Gerard Nugent is a writer living in Yorkshire. ‘Let in the Light’ is his debut novel, although he has been writing songs for years.

Gerard was born and raised in Edinburgh, Scotland. He moved to England in his 20s and worked in various northern towns before settling in beautiful Yorkshire with his family and two guinea pigs.

He has written three albums (two of which will never be released!)

In 2019, he attended a writing class to help him generate ideas for further songwriting, but, instead, started writing a novel.

And this is where it’s ended up. Stay tuned.