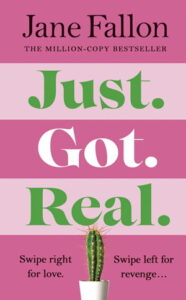 Just Got Real will be published on 23rd June by Michael Joseph in hardcover, eBook and audiobook. My thanks to the publishers for the proof copy of the book (and the cactus which I have so far managed to keep alive).

Joni never thought she would try online dating. She’s so nervous that she posts fake photos – but when she starts talking to Ant, who’s desperate to meet her, she doesn’t dare come clean. Instead, Joni finds a way to meet Ant without revealing her true identity. It’s perfect, it works, and she’s happy – until a few months in, Joni discovers she wasn’t the only one being deceitful: on Ant’s phone are intimate messages between him and two other women.

Hurt and furious, Joni calls the women. They’re angry. They want revenge. But how exactly will they get it? All hail Jane Fallon, the queen of the revenge novel. She’s back with another fantastic story, this time focusing on the perils of online dating. When Joni joins a dating app she, in a panic, uses a fake photo. She’s planning to confess all to Ant, the man she’s been happily dating for a few months, but then she finds out that he’s in the midst of a much bigger indiscretion when she discovers messages from other women, ones he’s communicating with at the same time as seeing her.

I absolutely loved Just Got Real. It’s modern, it’s relevant, it’s funny, and I was completely hooked from start to finish. Whilst the dating story is the primary storyline, it’s very much Joni who is the main focus of the story, as she moves on with her life after a divorce, the loss of a friend and her daughter leaving home. She takes comfort in her routine but there’s no real joy there. I won’t go into what happens along the way but by the end I was full of hope for her in the future.

Fallon describes Joni’s job-sharing down to a tee, that slight resentment of the other person and any work they didn’t manage to get to. She also does a brilliant job with the online dating world. More than anything though, I think I just found Joni and her life really relatable, and I enjoyed all the details of her life, her flat, her job and her love of the gym. I was sad to leave her behind and I feel like I got to know her really well.

Just Got Real is a book I didn’t want to end but it had to, and like another book I’ve read recently, although there is romance in there, it’s very much about female empowerment, with or without a partner in tow. Fallon is a supreme observer of human nature and dynamics between women, and a fabulous writer of fresh, contemporary fiction. I loved it!

Jane Fallon is the multi-award-winning television producer behind shows such as This Life, Teachers and 20 Things to Do Before You’re 30. Her Sunday Times bestselling books – Getting Rid of Matthew, Got You Back, Foursome, The Ugly Sister, Skeletons, Strictly Between Us, My Sweet Revenge, Faking Friends, Tell Me a Secret, Queen Bee and Worst Idea Ever – have sold over a million copies in the UK.