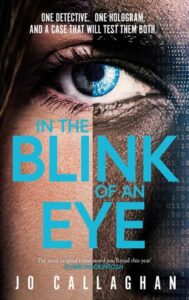 ShortBookandScribes #BookReview – In the Blink of An Eye by Jo Callaghan

In the Blink of An Eye by Jo Callaghan will be published by Simon & Schuster on 19th January in hardcover, eBook and audiobook. My thanks to the Likely Suspects for the proof copy.

In the UK, someone is reported missing every 90 seconds.
Just gone. Vanished. In the blink of an eye.

DCS Kat Frank knows all about loss. A widowed single mother, Kat is a cop who trusts her instincts. Picked to lead a pilot programme that has her paired with AIDE (Artificially Intelligent Detective Entity) Lock, Kat’s instincts come up against Lock’s logic. But when the two missing person’s cold cases they are reviewing suddenly become active, Lock is the only one who can help Kat when the case gets personal.

AI versus human experience.
Logic versus instinct.
With lives on the line can the pair work together before someone else becomes another statistic?

In the Blink of an Eye is a dazzling debut from an exciting new voice and asks us what we think it means to be human. In the Blink of an Eye was my last read of 2022 and what an absolute cracker to end the year with. I think it’s probably fair to say that a lot of policing is based on instinct, that gut reaction that something isn’t right, somebody isn’t telling the truth, as well as detective work. But instinct can be skewed – police officers are only human, after all.

DCS Kat Frank is returning to work following the death of her husband. Her boss wants her to lead a pilot into working with AIDE Lock to see if using AI has a place in modern policing and can help solve crimes and cold cases, or if it’s just basically a load of cobblers (which is kind of what Kat thinks to begin with). Lock is a fascinating creation and I think I was a little bit wowed by it and what it was capable of. The two detectives (Lock often appearing in hologram form) and their team set about trying to find out what happened to two missing people and I really enjoyed watching the thought processes on each side. Lock, of course, is very literal so when Kat told it not to speak again until it’s spoken to she has to accept the consequences when it doesn’t let her know a vital piece of information. Many times I had to smile at how what was and wasn’t said was interpreted by Lock.

I loved Kat too and was so pleased to learn that there is going to be a second book featuring her and her team (including Lock). All the way through this book I was thinking the story and characters were ripe for a series. In the Blink of an Eye is such a brilliant and original read, a police procedural with a difference. What makes this even more special is that it’s not just about the unusual detective partnership, it has a fantastic plot and some shocks too. This is a book that has it all and is one for all crime fiction fans out there. What a debut from Jo Callaghan!

Jo works full-time as a senior strategist, where she has carried out research into the future impact of AI and genomics on the workforce. After losing her husband to cancer in 2019, she started writing In The Blink of An Eye. She lives with her two children in the Midlands, where she is currently writing the second novel in the series.