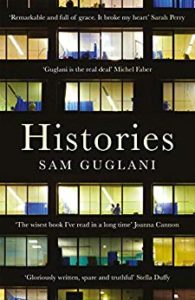 I’m reviewing this fascinating short read today – Histories by Sam Guglani. My thanks to Ana Sampson McLaughlin from riverrun for the review copy.

Histories is a hypnotic portrait of life in one hospital, over one week. In the corridors and consulting rooms, by the bedside, through the open curtain, we witness charged encounters within the emotional and physical world of medicine. Old insecurities surface as junior doctors try to save a man from dying; an enraged chaplain picks a fight with a consultant; a porter waxes lyrical on his invisibility.

These are only some of the stories that so seamlessly connect, collide and create an unforgettable panorama of being. Sam Guglani’s vivid prose has the raw intensity of poetry that pulls the reader in on every page.

Histories got me interested as soon as I read the blurb. It’s a series of interlinked stories set in a hospital over the course of one week. More specifically, it’s set around the oncology department. We witness events from the points of view of consultants, junior doctors, a chaplain, a cleaner, patients, a porter and so on.

Each story is intriguing, some are heartbreaking, some are hard-hitting. This is not a particularly emotional or sentimental book, but you can’t help but imagine the feelings evoked. For instance, what hit me hard whilst reading this book was a sense that some doctors are so fatigued by the day to day routine that they no longer see patients as people. It wasn’t necessarily something that I didn’t know, rather something I would prefer not to know. The author is a Consultant Clinical Oncologist himself so I imagine he’s writing from experience and from witnessing others’ experiences.

Do you know, I’ve been meaning to write this review for a while but now I’m doing so I find that it’s bringing out all kinds of emotions in me. I think it hit harder than I realised. As I say, it’s not that it’s full of emotion so much as it’s about real life, something that any of us could face.

It’s a short book but I think it was just the right length and gives just enough of each character, each viewpoint. It’s a book that spoke to me of life and death, of needing to feel like you are more than just a name above a bed, that you are flesh and blood, with complex feelings.

Guglani’s writing is pared back, raw, honest and true. It puts us right in the heart of the NHS and gives us an insight into the components that make the whole. It’s profound and thought-provoking and I found it to be a compelling read.

Sam Guglani is a doctor and writer. He completed his Masters in Creative Writing at Oxford, his poems have won prizes and he writes for The Lancet. In 2009 he founded Medicine Unboxed, an event series bringing together medicine and the arts, which he directs and curates every year. He is a Consultant Clinical Oncologist in Cheltenham.