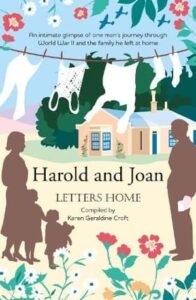 Harold and Joan: Letters Home is published by Crumps Barn Studio in paperback and eBook. My thanks to the publishers for the review copy.

“Darling the hour has almost arrived. We leave tonight … I am feeling it very much but I must not weaken. I must be brave. I think that will be the best attitude to take for us all”

Harold Bishop is called up to the army in 1941, aged 39. He leaves behind his wife Joan, his children and his livelihood as butler of the grand Cardoness House. What follows is a tender and revealing collection of letters home.

Despite the restrictions of the censors, Harold describes his time in a training barracks in Edinburgh, his health and clothes, and his eventual deployment to North Africa. His letters also reveal glimpses of Joan’s experiences, making this a valuable social history and a record of a soldier’s service. First of all, I must comment on how beautiful this book is to look at. The cover is absolutely gorgeous and the whole package is presented so attractively, with photographs and army documents segmenting the letters that have been typed up from Harold Bishop’s original letters home to his wife, Joan.

Harold was called up at the age of 39 in 1941. He left behind his wife and two young daughters and his job as a butler at Cardoness House in Dumfries and Galloway to train in Edinburgh before being deployed to North Africa.

The letters provide an interesting social history and although no replies to Harold’s letters have survived, his letters are fairly comprehensive and so it’s not too difficult to fill in any blanks. I was really surprised to note he sent his washing home whilst doing his training. There are many references to his vests and handkerchiefs and instructions for Joan to wash and return them to him. It later transpires that it was against regulations but who wouldn’t want a few home comforts after being wrenched from a comfortable home life to join the army?

Because Harold’s letters mostly date from his time training, rather than in combat, much of what he talks about is commonplace stuff (his washing, his desire for cigarettes, people he has seen etc) but knowing that he was later to be sent into the thick of the war means they have a greater poignancy.

Harold and Joan: Letters Home is an tender look at an ordinary man’s separation from his family throughout World War II.

Harold Bishop was born in 1902. At the outbreak of WWII, he was working as a butler for Cardoness Hall in Scotland. He lived with his family in the Old Lodge on the estate. Called up to the army aged 39 in 1941, he spent his training as a driver in Edinburgh before being sent to North Africa. He served throughout the war, returning home in 1945. His letters home have been transcribed and collected by his granddaughter Karen Geraldine Croft.