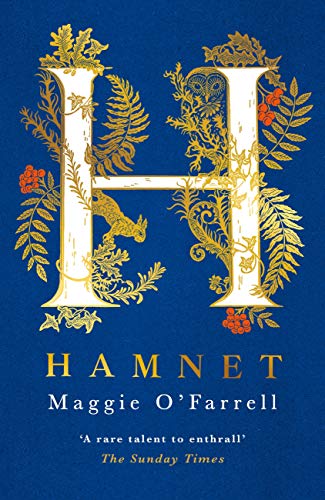 Wow, what a book this is. I’m delighted to be sharing my thoughts about it today. My thanks to Tinder Press who produced my proof copy. You can buy your very own copy in hardback or ebook from tomorrow.

TWO EXTRAORDINARY PEOPLE. A LOVE THAT DRAWS THEM TOGETHER. A LOSS THAT THREATENS TO TEAR THEM APART.

On a summer’s day in 1596, a young girl in Stratford-upon-Avon takes to her bed with a fever. Her twin brother, Hamnet, searches everywhere for help. Why is nobody at home?

Their mother, Agnes, is over a mile away, in the garden where she grows medicinal herbs. Their father is working in London. Neither parent knows that one of the children will not survive the week.

Hamnet is a novel inspired by the son of a famous playwright. It is a story of the bond between twins, and of a marriage pushed to the brink by grief. It is also the story of a kestrel and its mistress; flea that boards a ship in Alexandria; and a glovemaker’s son who flouts convention in pursuit of the woman he loves. Above all, it is a tender and unforgettable reimagining of a boy whose life has been all but forgotten, but whose name was given to one of the most celebrated plays ever written. Hamnet is one of the most highly anticipated reads of 2020, for me and for lots of other readers. After reading it, I can see why. It’s quite spectacular. I love Maggie O’Farrell’s writing anyway but she’s written something so completely immersive with Hamnet.

Hamnet was the son of William Shakespeare and Agnes (prounced Agn-yez). He was also the younger sibling of Susanna and twin of Judith. The story here has two strands running through it. One looks at Hamnet and his life at the age of 11. The other focuses on how William and Agnes met and started their life together. However, this is not a novel about Shakespeare, not really. He’s a secondary character to Agnes, who is so fully formed and so beautifully portrayed that I felt an affinity with her and a real sense of who she was.  I particularly enjoyed her otherworldliness, her way of intuiting the past and the future, her way with herbs and potions. She’s just so interesting.

This story is wonderfully atmospheric. It’s historical fiction but written with that contemporary edge to the language that makes it so accessible. I really could put myself in 16th century Stratford and London. In fact, this book gave me more of an insight into Shakespeare, his family and his work than anything else that I’ve read or seen. I’ve no doubt O’Farrell has fictionalised a fair amount but I’m sure just as much is based around what is known and I very much got the feeling she had done a great deal of research. In particular, I thought she captured very well the properties where Shakespeare and Agnes had grown up, lived and worked.

Ultimately this is a story of grief and I found it absolutely heartbreaking. Tears were shed. The loss of a child is so intensely moving and written with such empathy that it was impossible not to feel despair along with the characters, especially Agnes and Judith.

Hamnet is not a book that I was able to rush, in fact it took me probably twice as long as a book that size would normally take, but I’m pleased I was able to take my time and savour it at the pace it deserved. It’s absolutely wonderful.