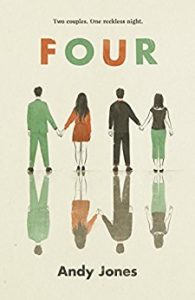 I’m thrilled to be able to share my review of Four by Andy Jones today. I loved this book and would like to thank Louise Swannell from Hodder Books for kindly sending me the review copy.

In the time they’ve known each other, Sally, Al and Mike have shared – well, almost everything.

Sally and Al have been married for seven years, though now their relationship is hanging by a thread.

Sally and Mike have been best friends since university. And on many occasions something more.

Mike and Al have been friends and colleagues for many years. Yet with Al poised to become Mike’s boss, their friendship comes under threat.

And now there’s Mike and Faye. They haven’t been together long, but Mike’s pretty sure that, this time, it’s the real deal.

As the three old friends sit on a train heading towards Brighton to meet Faye, little do they know that after this weekend, the four of them will have shared . . . everything.

They all know they have made a mistake.
But they could never have imagined the consequences.

I read and enjoyed a previous book by Andy Jones, Girl 99, so when I saw he had a new book coming out with such an engaging cover, I was immediately tempted. The cover is very clever and hints at some of the conflicts contained in the pages within.

I thought Four got off to a fairly slow start. The main action takes place very early on, but there’s also quite a bit of scene-setting and introduction to the characters. I did keep getting the two couples muddled up (perhaps this was prescient given what was about to take place!). But what that slow start did was draw me into the action bit by bit until I was thoroughly engrossed in what the two couples were doing and feeling.

Those two couples are Sally and Alistair, married for seven years, together for ten, and Mike and Faye whose relationship is very new. But Sally and Mike have known each other since university and have shared more than just a friendship over the years, and Mike and Alistair work together. So things are complicated when the three friends  set off to see Faye in a play in Brighton. A game of Never Have I Ever leads to far more than any of them could have anticipated, and the consequences are potentially far-reaching.

I thought Four was a very intelligent piece of writing about relationships, feelings, regrets and life’s complications. Andy Jones completely hits the spot and has written such an emotive and thoughtful story. His ability to write about flawed characters and difficult situations is something that I saw in Girl 99 too. I was able to immerse myself in the individual predicaments of each character in Four and see it from all sides and although none of the characters comes out unscathed, I thought the conclusion was fitting.

Four perfectly portrays the dynamics between friends, lovers and rivals. The characterisations are so well-drawn that I felt like I was on the rollercoaster of emotions with them. I got to the end of the book and felt satisfied. It’s such a human story and I found myself caring about what happened to the characters and wondering how on earth matters could be resolved.

Give it a go. After all, as the characters say a lot during that fateful night in Brighton, ‘you only regret the things you don’t do’ and you’ll definitely regret not reading Four. In one form or another, Andy has always been a writer. At school, he passed notes in class and scribbled rude words on lampposts. At University, he wrote a PhD in biochemistry and forged tickets to various balls. And as an advertising copywriter, has written commercials for everything from baby food to booze. But it wasn’t until he was well into his thirties that Andy stared writing fiction. If he could write a letter his younger self, it would urge him to stop messing about and get on with it. FOUR is his fourth novel, but should probably be his tenth.