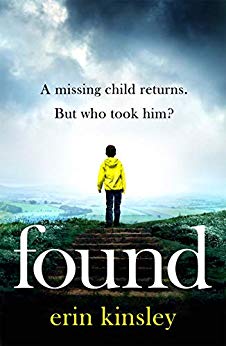 I’m absolutely thrilled to be reviewing Found by Erin Kinsley today as part of the blog tour. It’s an absolutely fantastic read. My thanks to Jenny Harlow from Headline for sending me a proof of the book for review purposes and to Anne Cater from Random Things Tours for the place on the tour. When 11 year old Evan vanishes without trace, his parents are plunged into their worst nightmare.
Especially as the police, under massive pressure, have no answers. But months later Evan is unexpectedly found, frightened and refusing to speak. His loving family realise life will never be the same again.

A gripping, heart-wrenching thriller with the emotional power of series like BROADCHURCH and THE MISSING, this is the perfect read for fans of Cara Hunter, Heidi Perks, Claire Douglas, Fiona Barton, Susie Steiner and Nuala Ellwood.

Oh my goodness, this book is absolutely brilliant. It’s also quite harrowing. Don’t worry, it’s not graphic, but it’s quite obvious, even just from reading the blurb, that it’s not going to be an easy read.

Evan Ferrars is 11 and on his way home from school. He stayed late with his friend, Stewie, for rugby practice, called in the shop and then went to the bus stop. Stewie went home but Evan never got on the bus. He’s reported missing by his frantic parents, the police get involved, but Evan is not found. Until, that is, eight months later when, by pure chance, he is found. The story doesn’t end there though. There is the aftermath to deal with, Evan’s inability to cope, the fracturing of his family, and their battle to keep going in the face of such adversity.

Oh wow, this is such an amazing read. It’s a police procedural, it’s a family-led story, it’s an emotional rollercoaster and it’s a gripping story, all rolled into one. It’s surely every parent’s worst nightmare, your child going missing, and I really felt Matt and Claire’s pain. Later on, I had to bite down on my finger to stop myself crying and giving myself a headache as I think if I had let go I’d have sobbed my heart out. Evan’s story is utterly heartbreaking.

Running alongside the family story is the police investigation and it provides the written equivalent of a split screen so we can see both sides of those hours, days and months after Evan’s disappearance. Sometimes police procedurals can be a bit dull and sometimes they can be truly fantastic. In this case the latter applies. I really enjoyed following the team, DI Naylor and DS Hagan in particular, as they try and find out first of all where Evan is and then later what happened to him. Obviously they want to try and catch the people who took him and to try and stop it happening all over again but resources are spread too thinly and they’re frustrated by their lack of progress.

My favourite character was probably Jack, Evan’s grandfather, a patient, kind and stoic farmer. He was just what Evan needed following his return to his family and I enjoyed his scenes with his wife and his grandson very much.

Found is a beautifully written story. I was completely enthralled by it. I literally didn’t want to put it down. I was right there in between the pages, living the nightmare that didn’t even go away once Evan was found. He broke my heart!

It’s a perfect book in every way for me and is sure to be on my books of the year list. I felt empathy and sympathy, horror and shock, and I found it a very emotional read. Highly recommended by me! Erin Kinsley is a full-time writer. She grew up in Yorkshire and currently lives in East Anglia. Now writing under a pseudonym, her previous books were published by Bloomsbury. Longlisted for the Desmond Elliot prize amongst other awards, her writing has received glowing reviews across the national press.