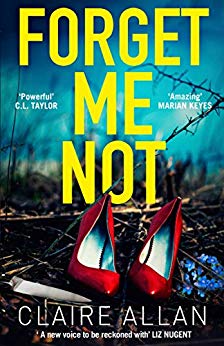 I’m really pleased today to be reviewing Forget Me Not by Claire Allan. My thanks to Sabah Khan from Avon Books for the place on the tour and for sending a copy of the book for review purposes.

What a fabulous book. I inhaled it in the space of a day (all right, I was running behind with my reading but even so, it’s one I just didn’t want to put down).

It gets off to a blistering start with the discovery of a body during a heatwave. Elizabeth O’Loughlin is out walking her dog one morning when she discovers Clare Taylor, a woman who has been the subject of a vicious attack. Elizabeth hears Clare’s last words but they don’t mean a great deal to her.

We then hear from Elizabeth throughout the story and it’s clear she has a place in the story but what is not clear is what that place is. We also hear from Rachel, one of Clare’s best friends, and we follow her as she deals with the aftermath of Clare’s attack amidst the mess that her own life is becoming. As the story progresses it becomes clear that there’s a lot more to the attack than first thought and more women are in danger.

I found Forget Me Not to be an intense and gripping read all the way from that explosive beginning to the explosive ending. I had an inkling of some of what was to happen but not all of it and Claire Allan did a fantastic job of weaving the plot together to keep up the tension.

Hearing from the characters in the first person really puts the reader right into the heart of the action and at the end I was just turning those pages as fast as I could. It’s really exciting stuff with lots of twists and turns. Claire Allan is an International Bestselling Author from Derry in Northern Ireland.

She wrote her first novel in 2006, and Rainy Days and Tuesdays was subsequently published in 2007 and reached number 2 in the Irish Bestsellers chart. She published seven further women’s fiction books with Poolbeg Press before switching genres to crime/ domestic noir.

Her debut psychological thriller, Her Name Was Rose, was published by Avon Books, an imprint of Harper Collins, in June 2018. It has hit the bestseller charts in the UK, Australia, Canada and is a USA Today bestseller.

A former journalist with the Derry Journal, Claire made the switch to writing full time in 2016.
She is married, a mum to two kids (one of each kind) and they share their home with two cats and a dog. She considers Michael Buble to be her one true love – although she rarely talks about the time she met him, and he kissed her and she kissed him back.
Website
Twitter
Facebook
Instagram