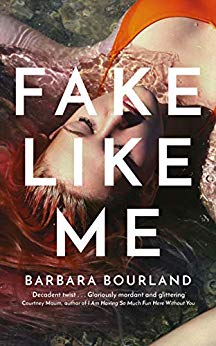 I’m reviewing Fake Like Me by Barbara Bourland today, a novel that left me with quite mixed feelings. My thanks to the publishers, Quercus, for the proof copy via the Amazon Vine programme. I got a bit taken along with the hype about this book. To be fair to the book I probably shouldn’t have read it as I had a feeling it wasn’t going to be quite my thing.

Fake Like Me is the story of an unnamed painter. She is in awe of Pine City, the name for a group of five artists, and in particular she idolises Carey Logan, a sculptor turned performance artist, immortalised by her death at her peak.

We follow the painter as she embarks on her own career producing massive oil paintings, we follow her ups and downs, and then when one of those downs leads her to become involved with the remainder of Pine City, we witness her inadvertently filling the space that Carey left behind.

It’s a fascinating story, made even more so by the twist in the tale towards the end, something I could never have guessed at in a million years. There is much to like about the whole thing in fact. I liked the characterisations, our heroine with her pink hair, the Pine City artists, her narcissistic friend from childhood, Max. The art scene is fascinating, not least the cost of the materials which left me reeling. And yet, somehow I was never completely convinced by this story, never completely embedded into the painter’s story. She is quite introspective, quite careless with her skills and I felt like she sometimes needed a good shake. The story is fairly intense and for some reason it failed to keep me fully absorbed.

I read to the end, partly because I was taking part in the publisher’s readalong, but also because I needed to know how the story ended, what would happen to the painter. Strangely though, I also didn’t really care what happened to her until near the end when the twist is revealed. The first quarter and the last quarter are very good, the middle sections, for me, fell a bit short.

This is a book where very little happens apart from the narrator getting into calamitous situations and spending time with bright, young things. And yet, there is something quite compelling about it really. A strange combination! Barbara Bourland lives in Baltimore, MD. I’ll Eat When I’m Dead is her first novel. Formerly, she was a freelance writer for Forbes Traveler, Condé Nast Digital’s Concierge.com, and a web producer for O, The Oprah Magazine and OWN, The Oprah Winfrey Network.