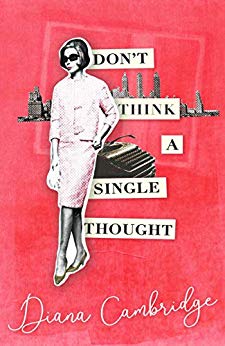 I’m so pleased to be sharing my review of this fabulous book today. My thanks to Louise Walters of Louise Walters Books for sending me a gorgeous copy of the book for review purposes.

1960s New York, and Emma Bowden seems to have it all – a glamorous Manhattan apartment, a loving husband, and a successful writing career. But while Emma and her husband Jonathan are on vacation at the Hamptons, a child drowns in the sea, and suspicion falls on Emma. As her picture-perfect life spirals out of control, and old wounds resurface, a persistent and monotonous voice in Emma’s head threatens to destroy all that she has worked for… Taut, elegant and mesmerising, Don’t Think a Single Thought lays bare a marriage, and a woman, and examines the decisions – and mistakes – that shape all of our lives.

I hardly know where to start with this novella. It’s only 175 pages but it packs a mighty punch. I read a few pages before bed one evening and when I woke during the night, and again the next morning, I found this story was on my mind, such was the impact of it right from the off.

Emma Bowden is a Manhattan woman, chic, well-groomed. She keeps up appearances as a perfect surgeon’s wife to Jonathan. Yet scratch the surface and there is much more beneath. On a break in the Hamptons she has a slight altercation with the three children of a family who are playing on a beach. When one of those children later drowns in the sea, the parents wonder if Emma had any part in the incident. This is not as crazy as it sounds as we slowly discover that Emma has a past that makes her rather unstable. However, this is only the beginning and the drowning of the boy only serves as a catalyst to send Emma spiralling ever deeper into an internal despair.

Don’t Think A Single Thought is a most fascinating read, looking at the human psyche, anxiety and the effects of a person’s upbringing on their entire life. It’s mostly set in the 1960s and 70s but we are given insights into Emma’s past and it’s quite clear that it’s been a rocky road to the poised lady she has become.

Emma is a very unreliable narrator. Not only does she change the story to suit herself, which we can see happening, but she honestly has difficulty recalling whether certain events really happened or not and the lines between reality and fiction are blurred, ironic for a writer, which is what Emma is. It’s a very worrying situation to read about and frankly it was also completely compelling. I actually started to wonder if events had really happened or not!

She’s intrinsically flawed but admits it and she is surprisingly honest about her own failings and her opinions, such as her feelings about an overweight woman. She’s not always the easiest woman to like but I found I sympathised, and indeed empathised, with her.

Diana Cambridge has applied some masterful plotting in this book and I thought it was so clever how things began to dawn on me without having them spelled out. She’s written such an interesting character in Emma, one which I found myself drawn back to time and again. I thought this was an extremely accomplished debut and I’m excited to see what she does next.

Diana Cambridge is an award-winning journalist. She has written for many national newspapers and magazines, gives regular writing workshops, and is a Writer-in-Residence at Sherborne, Dorset. She is Agony Aunt to Writing Magazine. She lives in Bath. Don’t Think a Single Thought is her first novel.