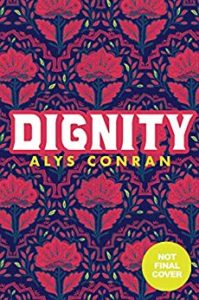 I’m delighted to be sharing my review of Dignity by Alys Conran today on the first day of the blog tour. My thanks to Tracy Fenton from Compulsive Readers for the place on the tour and to the publishers, Weidenfeld & Nicolson for the review copy of the book via Amazon Vine.

Magda is a former scientist with a bad temper and a sharp tongue, living alone in a huge house by the sea. Confined to a wheelchair, her once spotless home crumbling around her, she gets through carers at a rate of knots.

Until Susheela arrives, bursting through the doors of Magda’s house, carrying life with her: grief for her mother’s recent death; worry for her father; longing for a beautiful and troubled young man.

The two women strike up an unlikely friendship: Magda’s old-fashioned, no-nonsense attitude turns out to be an unexpected source of strength for Susheela; and Susheela’s Bengali heritage brings back memories of Magda’s childhood in colonial India and resurrects the tragic figure of her mother, Evelyn, and her struggle to fit within the suffocating structure of the Raj’s ruling class.

But as Magda digs deeper into her past, she unlocks a shocking legacy of blood that threatens to destroy the careful order she has imposed on her life – and that might just be the key to give the three women, Evelyn, Magda and Susheela, a place they can finally call home.

This is one of those books with a blurb that immediately captured my interest. It’s the story of three women, all of them fascinating characters.

Magda is, I think, the one around which the other two revolve. She’s a clever lady, but she’s old now and her body is letting her down. She lives in a huge house with parts closed off and relies on carers to come in and help her, even with going to the toilet. One of her carers is Susheela and whereas many of the carers seem to Magda to be annoying and insipid, Susheela reminds Magda of her early life in India.

The third woman is Evelyn, Magda’s mother. Having travelled to join her husband in India with hope and love in her heart, things didn’t turn out at all how she expected. Evelyn’s story is ultimately a sad one, of broken dreams, toeing the line, of being stifled by her husband and her situation.

The title really means something. Dignity is something Magda is fast losing and it makes her prickly and difficult for the carers to like. But Susheela sees beyond that and finds herself warming to Magda. It’s an unlikely friendship but that’s what it becomes. Susheela is finding that things are going backwards in her home town and racial slurs are aplenty, and in India Evelyn seems to have no chance of dignity anymore.

I could feel the tears forming quite early on, in Susheela’s first chapter in fact, when we go with her to Henry’s house, a man she is caring for. She’s only allowed half an hour with each person she cares for – what can you do in half an hour? I know this is an accurate portrayal of the care system and it just highlights even more that lack of dignity that so often comes with old age.

I found myself thoroughly drawn into the lives of the three protagonists. Their stories are told in pretty much alternating chapters and this works so well to explain how each of them ended up where they are. Whilst the chapters set in India with Evelyn and her husband were not perhaps my favourite of the three, I really found Colonial India during the ‘rule’ of the British Raj beautifully drawn, if not our finest hour. I had a real sense of the way Evelyn was living, shut up in a house with servants feeling like they are watching her every move. I hated the way the servants were treated in their own country and feel ashamed that the British thought they were so superior.

Dignity is a skilfully written story in every way, looking at parallels between the women’s lives. It’s a powerful and perceptive look at racial issues in the 20th and 21st centuries and I was thoroughly captivated by it. It’s not the easiest read in terms of content and at times it feels quite brutal, but in terms of readability Dignity has it in spades. Alys Conran’s first novel Pigeon (Parthian Books) won the Wales Book of the Year Award 2017 and was shortlisted for the International Dylan Thomas Prize. It also won the Rhys Davies Trust Fiction Award, The Wales Arts Review People’s Choice Award and was longlisted for the Author’s Choice First Novel Award. Her second novel Dignity will be published in 2019 by Weidenfeld and Nicolson. She also publishes poetry, short stories, creative non-fiction, creative essays and literary translations and her work is to be found in numerous magazines and anthologies including Stand and The Manchester Review. Her short fiction has been placed in the Bristol Short Story Prize and the Manchester Fiction Prize. She has read at festivals including The Hay Festival, the Edinburgh Book Festival and on the radio, including Radio Four.

Originally from north Wales, she spent several years in Edinburgh and Barcelona before returning to the area to live and write, and speaks Spanish and Catalan as well as Welsh and English. She has worked as a youth worker, teacher, and in community arts and is now Lecturer in Creative Writing at Bangor.