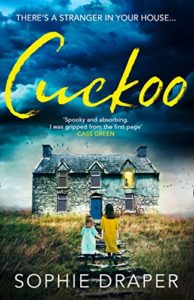 Posted on 4th December 2018 By Nicola

Welcome to my stop on the blog tour for Cuckoo by Sophie Draper. I’ll be reviewing the book today. My thanks to Sabah Khan from Avon Books for the place on the tour and the review copy via Netgalley.

There’s a stranger in your house…

When her stepmother dies unexpectedly, Caro returns to her childhood home in Derbyshire. She hadn’t seen Elizabeth in years, but the remote farmhouse offers refuge from a bad relationship, and a chance to start again.

But going through Elizabeth’s belongings unearths memories Caro would rather stay buried. In particular, the story her stepmother would tell her, about two little girls and the terrible thing they do.

As heavy snow traps Caro in the village, where her neighbours stare and whisper, Caro is forced to question why Elizabeth hated her so much, and what she was hiding. But does she really want to uncover the truth?

A haunting and twisty story about the lies we tell those closest to us, perfect for fans of Ruth Ware and Cass Green.

This book had a big cover reveal back in October and I can see why. The cover is just gorgeous but not only that, it’s actually completely relevant to the story.

Caro Crowther is a children’s book illustrator. After the death of her stepmother, Elizabeth, with whom she had a very turbulent relationship, she returns to her childhood home. Elizabeth’s death also brings Caro back into contact with her sister, Steph, who she hasn’t seen for many years. And going through Elizabeth’s belongings unearths an item that brings back many unhappy memories for Caro.

Cuckoo is one of those books with a delightfully unreliable narrator in Caro. Her return to the farmhouse triggers all sorts of feelings and memories but we don’t know if the place is haunted, whether Caro is suffering from some sort of hallucinations or whether somebody is simply trying to play tricks on her or drive her out. So as the reader, I was completely in the dark and feeling all the same kinds of discomfort as Caro.

I found her relationship with Steph fascinating, especially when some incredible secrets are brought to light. It’s amazing how much the brain can block out to protect us from unpleasant events. I also really enjoyed the whole stepmother/stepchild dynamic between Caro and Elizabeth as Caro reflects on the past.

The story is set in Derbyshire in a small village close to Ashbourne. This pleased me for two reasons: one was that I’m familiar with some of the places mentioned (I’ve been to Ashbourne and Carsington Water a few times) and the other reason was that small villages offer that claustrophobic vibe, where everybody knows your business. Caro certainly feels that whilst she knows nobody, everybody knows her quite well.

Cuckoo is full of twists and turns, none of which I was expecting. And that ending – wow is all I can say. It’s certainly a psychological story, full of manipulation and mind games and it has a distinctly gothic style to it. Whilst it’s not the most fast-paced of books, it doesn’t need to be as it’s less of a thriller and more of a slow reveal from the recesses of Caro’s mind. I enjoyed it very much and hope that Sophie Draper will write more of the same. Sophie Draper won the Bath Novel Award 2017 with this novel. She has also won the Friday Night Live competition at the York Festival of Writing 2017. She lives in Derbyshire, where the book is set, and under the name Sophie Snell she works as a traditional oral storyteller.