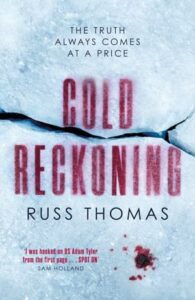 Cold Reckoning is book 3 of the DS Adam Tyler series by Russ Thomas. My thanks to Jess Barratt from Simon & Schuster for the proof copy of the book. It will be published in hardcover, eBook and audiobook on 12th May.

THE DARKNESS FROM HIS PAST WILL FINALLY COME TO LIGHT

For sixteen years, DS Adam Tyler has been searching for answers to his father, Richard’s, death. Convinced it wasn’t suicide, he has been investigating the case in secret.

When a body is found in a frozen lake, linked to a cold case from 2002, it doesn’t seem to have anything to do with the death of his father – except Tyler knows Richard was investigating the same case shortly before he died. And Tyler doesn’t believe in coincidences.

As he throws himself into finding out what really happened that day, Tyler uncovers a string of botched investigations, mysterious disappearances and, ultimately, deep-seated police corruption. There are dangerous people who don’t want Tyler asking questions – and the truth always comes at a price.

This time, it could cost him everything.

From the bestselling author of FIREWATCHING and NIGHTHAWKING. After the shock at the end of Nighthawking (so shocking that I made notes so I didn’t forget what happened) I was so excited to pick up Cold Reckoning, book three in the DS Adam Tyler series. I have to say that this is probably my favourite one so far, and I *really* loved the first two. Like most books that form part of a series, you can read this one as a standalone but I would heartily recommend picking up Firewatching and Nighthawking because there’s a very important back story and threads that run throughout all three.

Cold Reckoning sees Tyler investigating a frozen body found in the local reservoir and possible links to a cold case, alongside DC Mina Rabbani and DCI Jim Doggett. Russ Thomas’s characterisations are very strong and I was so keen to meet these three again. Tyler is also looking into his father’s death sixteen years ago which appeared to be suicide but which Tyler has his doubts about.

There are very distinct Line of Duty vibes to this book and I just couldn’t put it down. I was thoroughly engrossed in the unfolding action and the fast-paced story, which takes place over the course of one week. Tyler’s a bit of a maverick, He’s a good cop but he knows that not all police are the same. He, and I, didn’t know who to trust and it makes for a nailbitingly thrilling experience.

I’m hoping there’s more ahead for Tyler. Certainly there is a possible liaison to be explored further and the ending left me wanting to know what happened next. Thomas is a brilliant writer, bringing to life the Sheffield sights that are so familiar to me with an amazing and gripping plot and fantastically complex characters. Cold Reckoning had me well and truly hooked.

Russ Thomas was born in Essex, raised in Berkshire and now lives in Sheffield. After a few ‘proper’ jobs (among them: pot-washer, optician’s receptionist, supermarket warehouse operative, call-centre telephonist, and storage salesman) he discovered the joys of bookselling, where he could talk to people about books all day. His highly-acclaimed debut novel, Firewatching, is the first in the DS Adam Tyler series and published in February 2020. Nighthawking, the second book in the series, published in April 2021.  To find out more, visit his website or follow him on Twitter. https://russthomasauthor.com T: / @thevoiceofruss ​