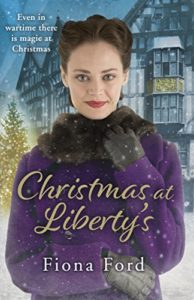 My final review before Christmas is of a Christmas book, Christmas at Liberty’s by Fiona Ford. But if you like the sound of it then don’t worry if you’re thinking it’s too late to read it now as it’s not so Christmassy that you can only read it during the run up to the big day. This is a book you can read at any time really.

I do love a book set in a shop so you can see why Christmas at Liberty’s appealed to me. Mary arrives in London in 1941, estranged from her family and with things in her past that she would like to forget. She finds a room in London, living with Dot and Alice, and a job in the fabric department of Liberty’s department store. Over the next few months she makes some wonderful friendships but she also makes one or two enemies who are intent on ruining Mary’s fresh start.

First of all, I loved Mary. She’s quite aristocratic but has come down in the world. She’s such a lovely person though and never behaves as though she is better than anyone else. Finding herself living in Elephant and Castle, she comes into contact with many different people. Her landlady, Dot, is a salt of the earth type and Alice, Flo and Rose, who all work at Liberty’s, take Mary under their wings and look after her.

I really liked the camaraderie between these characters and some of the other ones too. I felt like I would have loved to work at Liberty’s and be part of their ‘family’ during those war years, despite rationing meaning that there was very little incoming stock to sell. There’s a kind of magic surrounding the store and I admired the way it managed to not only keep going but to almost thrive. That was due to the way that everyone pulled together. But there were also some unpleasant characters who I wanted to shake as I got very annoyed with the way they behaved, especially towards Mary.

I think the author has done a lot of research and has done a really good job at capturing the spirit of the time and also that worry when loved ones go off to fight, as the girls from Liberty’s find out.

Christmas at Liberty’s is a really heart-warming story with plenty of ups and downs for the characters. It’s perfect for those who love sagas and stories set in wartime. I shall look forward to catching up with all the characters again in book two, The Liberty Girls.

Fiona Ford is the author of the Liberty Girls series, which is set in London during the Second World War.

Fiona spent many years as a journalist writing for women’s weekly and monthly magazines. She has written two novels under the pseudonym, Fiona Harrison, as well as two sagas in her own name in the Spark Girls series.

Fiona lives in Berkshire with her partner.