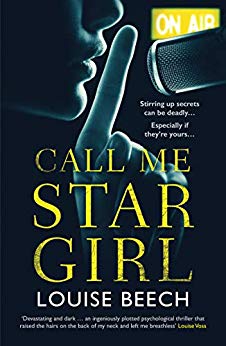 It’s always exciting when it’s time to delve into a new Louise Beech book. I’ve loved everything of hers that I have read (Goddammit, I still haven’t read How to be Brave though – you’re going to have to slow down Louise so I can read it before your next book comes out!). Today I’m reviewing her latest book and her first foray into the psychological thriller genre. My thanks to Karen Sullivan from Orenda Books for sending me a review copy of the book.

Stirring up secrets can be deadly … especially if they’re yours…

Pregnant Victoria Valbon was brutally murdered in an alley three weeks ago – and her killer hasn’t been caught.

Tonight is Stella McKeever’s final radio show. The theme is secrets. You tell her yours, and she’ll share some of hers.

What Stella really wants to know is more about the mysterious man calling the station … who says he knows who killed Victoria, and has proof.

Tonight is the night for secrets, and Stella wants to know everything…

With echoes of the Play Misty for Me, Call Me Star Girl is a taut, emotive and all-consuming psychological thriller that plays on our deepest fears, providing a stark reminder that stirring up dark secrets from the past can be deadly…

Orenda’s website with lots of other ways to buy.

Ooh Mrs Beech, you have a darkness in your soul! Call Me Star Girl is so much darker than the likes of The Mountain in My Shoe and, my personal favourite, The Lion Tamer Who Lost. What carries through all of this author’s books though is the beauty of the writing and a heartbreaking storyline, even in this, her first psychological thriller.

It’s Stella McKeever’s last show at the community radio station where she does the late night show. We follow her through the night, trying to work out why it’s her last show (Stella hardly knows herself) and who the mysterious person is who keeps ringing in with information about a local woman’s murder. Interspersed within that are flashbacks to when Stella met her boyfriend, Tom, a man who she loves with an intensity that always made me think she was going to come a cropper at some point, and also we hear from Elizabeth, Stella’s mother, with whom her relationship is historically difficult.

It’s a story that’s full of twists and turns as Beech drip feeds information to the reader. During the course of that one evening Stella finds out more than she’s known for her whole life, facts that throw curveball after curveball both at her and at me! I loved the whole radio station concept for the story, the way that Stella is alone in the building and is a lone voice to her listeners, sharing secrets and encouraging them to do the same. It really added a zing to think of Stella talking to the nameless people out there and because it’s a night show it’s that little bit more sinister.

I have to be honest and say Call Me Star Girl didn’t give me the emotional punch that I’ve experienced before with Louise Beech’s work but there still is a moving element to the story. It’s certainly compelling, requiring me to keep turning those pages to find out what was going to happen next. A couple of times I just didn’t know where it was going to go. Beech is a master plotter, a clearly versatile writer who can turn her hand to different genres.

This is a novel of dark desires, an ultimately sad story of abandonment, loss, love. It’s very noirish, in fact I could almost imagine the whole thing in black and white, with belted raincoats and trilbies! I enjoyed it very much indeed.

PS I was so glad to see the legend that is Bob Fracklehurst returning once again! Louise Beech is an exceptional literary talent, whose debut novel How To Be Brave was a Guardian Reader’s Choice in 2015. The sequel, The Mountain in My Shoe was shortlisted for the Not the Booker Prize. Her third book, Maria in the Moon was widely reviewed and critically acclaimed. Her short fiction has won the Glass Woman Prize, the Eric Hoffer Award for Prose, and the Aesthetica Creative competition, as well as shortlisting for the Bridport Prize twice. Louise is currently writing her next book. She lives with her husband and children on the outskirts of Hull – the UK’s 2017 City of Culture – and loves her job as Front of House Usher at Hull Truck Theatre, where her first play was performed in 2012.