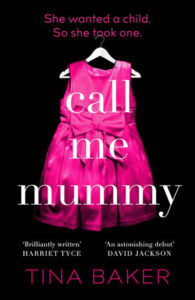 I’m sharing my thoughts today about Call Me Mummy, the debut novel by Tina Baker. My thanks to Miranda Jewess from Viper for the proof copy of the book for review purposes.

THIS MOTHER’S DAY YOU WILL CALL HER MUMMY

Glamorous, beautiful Mummy has everything a woman could want. Except for a daughter of her very own. So when she sees Kim – heavily pregnant, glued to her phone and ignoring her eldest child in a busy shop – she does what anyone would do. She takes her. But foul-mouthed little Tonya is not the daughter that Mummy was hoping for.

As Tonya fiercely resists Mummy’s attempts to make her into the perfect child, Kim is demonised by the media as a ‘scummy mummy’, who deserves to have her other children taken too. Haunted by memories of her own childhood and refusing to play by the media’s rules, Kim begins to spiral, turning on those who love her.

Though they are worlds apart, Mummy and Kim have more in common than they could possibly imagine. But it is five-year-old Tonya who is caught in the middle…

CALL ME MUMMY. IT’LL BE BETTER IF YOU DO. Call Me Mummy is a fantastic debut from Tina Baker. She doesn’t hold back for a minute and there were times when I was cringing at what was happening. It’s a very dark read, brutal at times, but no less engrossing for it.

This is ostensibly the story of two women. Mummy is the sort of woman who seems to have it all but she’s always wanted a child of her own and it’s something that has constantly eluded her. Kim is the opposite, the kind of woman who seems to pop children out left, right and centre and doesn’t even seem to like them that much. So when Mummy sees that Kim has turned her back on her daughter, Tonya, whilst out shopping, she seizes the opportunity and takes her.

This is a book that challenges the reader to look beyond the stereotypes. We all know the rubbish the media peddle. Kim is made to look like the worst mother possible and as the story progressed I was glad to be able to get to know her better and understand a bit more about her past. What’s really clever is the way the author draws parallels between the two women’s lives where you wouldn’t think there would be any, and it made for such a thought-provoking read. I really feel that it pushed me to get behind the façade and understand how much a person’s upbringing is absolutely key to the person they become.

Call Me Mummy is something of a rollercoaster ride. It’s a book that is full of light and shade, the murky side of life, and at times all that’s good about it. There might have been occasions when I wanted to look away from the page because what was happening was so horrific and unthinkable, but there were many more times when I was enthralled by what I was reading. The perspective shifts constantly between Mummy, Kim and Tonya (with a few guest appearances from people such as the police liaison officer and the press) and it made for a very fast-paced story. It felt like something quite fresh in style, with brave, no holds barred narratives from the people at the centre of Tonya’s disappearance.

Hard-hitting, insightful, disturbing, and brimming with tension and unlikable characters, Call Me Mummy felt like a change from the normal psychological thriller.

Tina Baker, the daughter of a window cleaner and fairground traveller, worked as a journalist and broadcaster for thirty years and is probably best known as a television critic for the BBC and GMTV. After so many hours watching soaps gave her a widescreen bum, she got off it and won Celebrity Fit Club. She now avoids writing-induced DVT by working as a Fitness Instructor.

Call Me Mummy is Tina’s first novel, inspired by her own unsuccessful attempts to become a mother. Despite the grief of that, she’s not stolen a child – so far. But she does rescue cats, whether they want to be rescued or not.