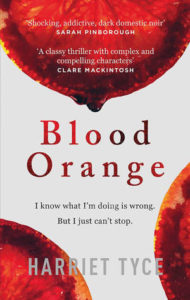 I’m over the moon to be on the blog tour for Blood Orange by Harriet Tyce today. This is one brilliant read. My thanks to Anne Cater from Random Things Tours for the place on the tour and to Wildfire Books for sending me a review copy of the book.

Blood Orange is a book that I’ve been hearing about for what seems like forever, and is definitely one of my most highly anticipated reads of this year. So did it live up to expectations? Absolutely 100% yes!

This is Alison’s story. She’s a criminal law barrister who has just been given her first murder case, that of Madeleine who is accused of killing her husband. Alison has a husband, Carl, and a six year old daughter, Matilda. But she also has a lover, someone who she is unable to resist, to say no to.

I want to be careful not to say too much about the story. The blurb is fairly vague for a reason, to enable the reader to become fully invested in Alison’s story without any prior knowledge. I felt for Alison though. She’s deeply flawed but is life really that cut and dried? I cringed at her actions sometimes but I always had this underlying sense that all was not as it seemed.

This is an utterly addictive book and I inhaled it over the course of a day. It’s dark, intense and thrilling. I thought the parallels between Alison’s life and what she was discovering about Madeleine’s were clever. In fact, this is one very clever book. I also really enjoyed the legal aspects to the story. I spent 17 years working in solicitors’ offices and there was much that I was familiar with.

The ending is dramatic and contains a hand over the mouth moment. If you’re wondering where the title of the book comes from then you’ll have to wait a bit but oh, it’s so good! The ending almost had me punching the air.

Blood Orange is absolutely superb. It’s the psychological thriller/domestic noir genre at its best. I have a feeling Harriet Tyce is an author to watch. To produce a debut of this high standard makes me very excited for what she does next (no pressure!). Harriet Tyce grew up in Edinburgh and studied English at Oxford University before doing a law conversion course at City University. She practised as a criminal barrister in London
for nearly a decade. She is currently doing a PhD in Creative Writing at the University of East Anglia.

She lives in north London. Blood Orange is her debut novel.