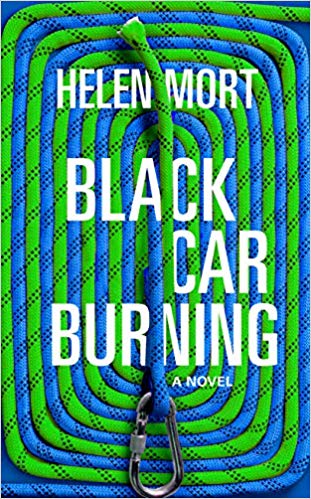 I’m so pleased to be taking part in the Swansea University Dylan Thomas Prize longlist blog tour today. This is an epic tour as 66 bloggers review the 12 books on the list. My thanks to Martina Ticic from Midas PR for asking me to be a part of it and for providing a copy of the book for review purposes. How do we trust each other?

Alexa is a young police community support officer whose world feels unstable. Her father is estranged and her girlfriend is increasingly distant. Their polyamorous relationship – which for years felt so natural – is starting to seem strained. As she patrols Sheffield she senses the rising tensions in its disparate communities and doubts her ability to keep the peace, to help, to change anything.

Caron is pushing Alexa away and pushing herself ever harder. A climber, she fixates on a brutal route known as Black Car Burning and throws herself into a cycle of repetition and risk. Leigh, who works at a local gear shop, watches Caron climb and feels complicit.

Meanwhile, an ex-police officer compulsively revisits the April day in 1989 that changed his life forever. Trapped in his memories of the disaster, he tracks the Hillsborough inquests, questioning everything.

As the young women negotiate the streets of the city and its violent inheritance, the rock faces of Stanage and their relationships with each other, the urban and natural landscape watches over them, an ever-present witness. Black Car Burning is a brilliant debut novel of trust and trauma, fear and falling, from one of our best young writers.

When I was first looking at reading this book I had a look at the first few pages and I thought to myself that here is a book that is very ‘Sheffield’. As a born and bred Sheffielder that makes it great for me but don’t worry if you don’t know the city as you will still appreciate the story.

I do, however, think that the setting is crucial, not least because it deals with the aftermath of the Hillsborough disaster, particularly for police officers who were on duty that day, some of whom have never been able to move on. One of those ex-officers is a character in the book and he’s obsessive about going over and over his memories and the paperwork relating to the incident.

The other major characters are all women. Alexa is a PCSO who is in a polyamorous relationship with Caron. Caron is a climber and wants to attempt the difficult Black Car Burning climb at Stanage Edge. Leigh works in a climbing gear shop and watches on as Caron pushes herself further and further with her climbs, whilst also dealing with her slightly unstable boss, Pete.

In between each chapter is a vignette from the point of view of a place in Sheffield, really bringing the city to life for both residents and non-residents alike.

Feelings and emotions are very much at the forefront of Black Car Burning. I’d describe it as a quiet and intense read at times. I liked the way boundaries were challenged and that it’s far from formulaic. It’s a very well-written story of love, loss, trauma, being tested and being brave, leading up to a hopeful ending. Helen Mort is a poet as well as a debut novelist and her writing is definitely poetic in style. This meant that it wasn’t always easy for me personally to read but I do think she has an intelligent, thoughtful and descriptive writing style. I’m really interested to see what she writes next.

Helen Mort was born in Sheffield in 1985, and grew up in nearby Chesterfield. Five times winner of the Foyle Young Poets Award, she received an Eric Gregory Award in 2007 and won the Manchester Young Writer Prize in 2008. Her first collection, Division Street (2013), was shortlisted for the T.S. Eliot Prize and Costa Poetry Award, and won the Fenton Aldeburgh First Collection Prize. In 2014, she was named as a ‘Next Generation Poet’, the prestigious accolade announced only once every ten years, recognising the 20 most exciting new poets from the UK and Ireland. No Map Could Show Them (2016), her second collection, about women and mountaineering, was a Poetry Book Society Recommendation. Helen has been the Wordsworth Trust Poet in Residence and the Derbyshire Poet Laureate and was named one of the RSL’s 40 under 40 Fellows in 2018. She is a Lecturer in Creative Writing at Manchester Metropolitan University and lives in Sheffield. Black Car Burning is her first novel.