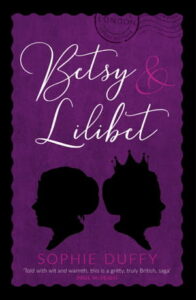 Betsy & Lilibet by Sophie Duffy is published by Legend Press in paperback, eBook and audiobook.

A tale which spans generations to explore the life and times of a family at the heart of their community, the story of a stoic young woman who shares a connection with her queenly counterpart in more ways than one…

London, 1926. Two baby girls are born just hours and miles apart. One you know as the Queen of England, but what of the other girl- the daughter of an undertaker named in her honour? Betsy Sunshine grows up surrounded by death in war-torn London, watching her community grieve for their loved ones whilst dealing with her own teenage troubles… namely her promiscuous sister Margie. As Betsy grows older we see the how the country changes through her eyes, and along the way we discover the birth of a secret that threatens to tear her family apart. Some years ago I read Sophie Duffy’s debut novel, The Generation Game, and loved it for its nostalgic feel and social references. I’ve long been meaning to read another of her books, and in particular Betsy and Lilibet with its royal connection as I am a huge fan of royal fiction.

Betsy Sunshine and Elizabeth Windsor were born on the same day in 1926. Of course, we know that one was born a princess and went onto be a queen. Betsy was born an undertaker’s daughter and went onto be an undertaker herself, taking over the family business when there were no sons as heirs to Sunshine & Sons. Over the course of their lives Betsy and Elizabeth meet three times. This is very much Betsy’s story though, with the royal link being more of a background feature, and a series of cleverly written parallels.

I enjoyed this book immensely. I love a story of one person or family that spans a long period and this book follows Betsy from her birth until 2016 when she’s in a residential home. It’s dual timeline with alternating chapters set in 2016 and then throughout Betsy’s life, looking back to key events. Duffy’s sharp wit is in evidence and I laughed out loud so many times. She has a way of describing things that is steeped in dry humour and Betsy’s own acerbic manner just added to that. With any family comes the highs and the lows and Betsy has her share of bad fortune. Her strength and stoicism kept her going and she’s a brilliantly drawn character.

Betsy and Lilibet is a wonderful novel, one for any fans of 20th century historical events. Alongside Betsy I witnessed the war years, the VE day celebrations, the royal wedding, the coronation and then later, IRA bombings, HIV and AIDS, and the death of a princess. Having Betsy be an undertaker was such a great move too, giving a sense of the passage of life that we all must take, and it made her a sympathetic character, putting on a good show no matter what. This book also reminded me of all that I liked about Duffy’s writing in The Generation Game and I now want to make sure I read her other books as well.

Sophie Duffy is the author of The Generation Game (2011), The Holey Life (2012), Bright Stars (2015) and Betsy And Lillibet (2018). Her work has won the Yeovil Literary Prize and the Luke Bitmead Bursary, and has been nominated for the Guardian Not the Booker and the Harry Bowling Prize. She is a writer and creative writing tutor and mentor for CreativeWritingMatters, as well as an administrator for the Exeter Novel Prize and other literary competitions.