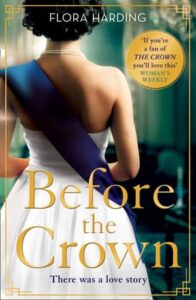 ShortBookandScribes #BookReview – Before the Crown by Flora Harding

Before the Crown is published by One More Chapter and is available in paperback, eBook and audiobook.

As war rages across the world, Princess Elizabeth comes face to face with the dashing naval officer she first met in London nine years before.

One of the youngest first lieutenants in the Royal Navy, Philip represents everything she has always been taught to avoid. Instability. Audacity. Adventure.

But when the king learns of their relationship, the suitability of the foreign prince is questioned by all at court.

He is the risk she has never been allowed to take. The risk not even the shadow of the crown will stop her from taking…

Step through the palace gates and discover a captivating historical novel of royal secrets and forbidden love exploring the tempestuous courtship between Princess Elizabeth and Prince Philip in the wake of WWII. The story of how our late Queen met her husband to be is well-known but Flora Harding really brings it to life in Before the Crown, a fictionalised but well-researched version of the events that led up to Elizabeth and Philip’s wedding in 1947.

Against the odds, the couple were allowed to marry. Princess Elizabeth was the heir to the British throne whereas Prince Philip was a penniless naval officer from the exiled Greek royal family. Not many people were in favour of the match but the princess was determined. This was her man, and this is ultimately a story of romance versus duty and finding a way to combine the two successfully.

I love fictionalised stories of real events and none more so than when they are around royal events and the royal family. Earlier this year I read Harding’s second royal novel, The People’s Princess, which I thought was a fantastic read. I actually had Before the Crown on my shelves already and with recent events it seemed like the perfect time to pick it up and remember the Queen in happier, more carefree times, when she thought she had plenty of time ahead of her before she ascended to the throne.

Before the Crown is such an enjoyable read. I thought the characters were written perfectly and felt true to their real-life counterparts, and I was so taken with the portrayal of two young people with their whole lives ahead of them, especially knowing now what a long and happy marriage they went on to have. It’s a lovely work of historical fiction that was absolutely right up my street, with one or two ‘aah’ moments that warmed the cockles of my heart. Charming and so engaging, I absolutely loved it.

I began writing over 30 years ago to fund a PhD on the disposal of waste in Elizabethan York (more interesting than you might think!), and I’ve juggled fact and fiction ever since. Under various pseudonyms I’ve written fiction and non-fiction in a range of genres, and now have more than 75 books under my belt. I’m fascinated by the relationship between the past and the present which seems to be at the heart of whatever I’m writing.

I live in the north of England, in the wonderfully historic city of York – if I go out of my front door I can see the city walls and the Minster at the end of my street – but I yearn for open horizons too. I love travelling to wild places and am a keen walker, cook and card player.