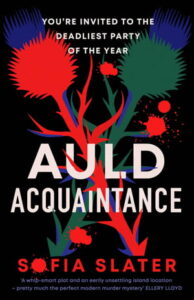 Auld Acquaintance by Sofia Slater will be published by Swift Press on 3rd November 2022 in hardcover and eBook. My thanks to the publishers for the proof copy.

Should auld acquaintance be forgot

And never brought to mind?

Millie Partridge desperately needs a party. So, when her (handsome and charming) ex-colleague Nick invites her to a Hebridean Island for New Year’s Eve, she books her ticket North.

But things go wrong the moment the ferry drops her off. The stately home is more down at heel than Downton Abbey. Nick hasn’t arrived yet. And the other revellers? Politely, they aren’t exactly who she would have pictured Nick would be friends with.

Worse still, an old acquaintance from Millie’s past has been invited, too. Penny Maybury. Millie and Nick’s old colleague. Somebody Millie would rather have forgotten about. Somebody, in fact, that Millie has been trying very hard to forget.

Waking up on New Year’s Eve, Penny is missing. A tragic accident? Or something more sinister? With a storm washing in from the Atlantic, nobody will be able reach the group before they find out.

One thing is for sure – they’re going to see in the new year with a bang.

Tense, moody and claustrophobic, Auld Acquaintance is the unputdownable debut by Sofia Slater. Millie Partridge receives an unexpected invitation from old colleague, Nick. He invites her to a Scottish island for a big New Year’s Eve party but when she arrives there nothing seems right. The house isn’t set up for a party, there are only a handful of people and Millie gets a nasty surprise when she recognises one of the other guests.

I felt that Auld Acquaintance was a murder mystery with a fairly fresh feel to it. It’s modern and contemporary but with a locked-room element that could have come straight from an Agatha Christie novel. Tragedy occurs pretty early on and for Millie and the other ‘partygoers’ it’s pretty much downhill from then on.

Sofia Slater did a good job at keeping me guessing. I suspected everyone, including our narrator Millie, of being up to no good. I loved the setting of the down-at-heel stately home on an island closed off because of bad weather. Auld Acquaintance is a fast-paced story with barely a page going by when there wasn’t some new revelation or shocking event. This is a quick read and despite the body count and the gruesome descriptions, it also felt quite light. It would be just the thing for a New Year themed read. Sofia Slater was raised in the American West, and lived in France, Scotland and Oxford before settling in London. As well as writing fiction, she translates from French and Spanish. Auld Acquaintance is her debut novel.