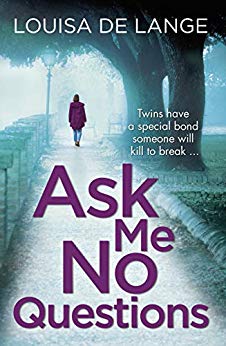 I’m delighted to be sharing my review of Ask Me No Questions by Louisa de Lange today as part of the blog tour. My thanks to Alainna Hadjigeorgiou from Orion for the place on the tour and for the fabulous copy of the book for review purposes.

TWINS HAVE A SPECIAL BOND SOMEONE WILL KILL TO BREAK . . .

As children, Gabi and Thea were like most identical twin sisters: inseparable.

Now adults, Gabi is in a coma following a vicious attack and Thea claims that, until last week, the twins hadn’t spoken in fifteen years. But what caused such a significant separation? And what brought them back together so suddenly?

Digging into the case, DS Kate Munro is convinced the crime was personal. Now she must separate the truth from the lies and find the dangerous assailant – before any more blood is spilled . . .

I was a huge fan of The Dream Wife, Louisa de Lange’s first book, in particular its clever curveballs. I was excited when I heard she had a new book out, but have to confess I was nervous about the fact that it’s a police procedural introducing DS Kate Munro. It seemed like it might be very different to The Dream Wife and I wondered if all the things I liked about that book might be lost in Ask Me No Questions.

Well I can happily report that this is just as twisty as I hoped, even if it doesn’t quite have the wow moment of the first book. We meet identical twins, Gabi and Thea and as the book begins Gabi has just been attacked and left in a coma. Things are difficult between the two of them and they have been estranged for a number of years following a shocking incident in their childhood. We also meet Harry, their childhood friend, with whom they have a lifelong connection.

In chapters alternating between Kate’s investigation into Gabi’s attack and the story from the viewpoint of the twins, we delve into the days before the attack and also discover more about what happened fifteen years earlier.

I don’t want to say a single other thing about the plot as the blurb doesn’t even touch the surface but I can say that it’s such a well put together story and just when I thought I knew where it was going de Lange threw in one of her famous curveballs. Yes, they do exist in this book too, I’m pleased to say.

I rather liked Kate. She’s a bit prickly and has many problems of her own but I think there’s lots of potential there and if this is the first in a series featuring her then I’m looking forward to finding out what happens next for her.

Ask Me No Questions is a fabulous story, a cut above some of the other police procedurals I have come across. Kate is a gutsy protagonist and the story of the twins made for a brilliant first outing for her. I found it such a gripping read and it really kept me guessing all the way to the end. Louisa de Lange studied Psychology at the University of Southampton and has lived in and around the city ever since. She works as a freelance copywriter and editor, and when she’s not writing, she can be found pounding the streets in running shoes or swimming in muddy lakes.