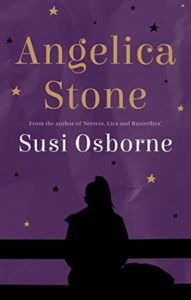 Welcome to my stop on the blog tour for Angelica Stone by Susi Osborne. My thanks to Rachel Gilbey from Rachel’s Random Resources for the place on the tour and to Susi for sending me the review copy some months ago. I got there in the end, Susi! You can read my review of Angelica Stone below and there’s also details of a fab giveaway to win a copy of each of Susi’s books.

Following years of sexual abuse, Angelica is brought up in care. As a teenager she absconds, living on the streets, before eventually being forced into prostitution to survive. She learns to rely solely on herself and is reluctant to allow anyone to get close to her, until she forms an unlikely bond with Lola. In contrast, Lola is from what appears to be a happy middle-class background – but all is not what it seems…

Slowly, as their friendship grows, cracks start to appear in Lola’s life, and a series of events leave her on the verge of ruin. Can these women break the cycle of their lives? Or will they succumb to the path laid out before them? Angelica Stone is an emotional rollercoaster of laughter and tears as the women embark on a journey of self-discovery, with the support of one another.

Purchase links to all of Susi’s books:

The Ripples of Life

I’d read some reviews of Angelica Stone before I read it so I thought I knew what to expect, but despite that I was still surprised by it. If the cover makes you think of something light-hearted then think again as what is between the covers is much more hard-hitting than I could have imagined.

First of all, meet Lola. She’s had a pretty cushy life growing up in suburbia with her parents who just can’t keep their hands off each other. Apart from recently splitting up with her boyfriend and ending up working on a supermarket checkout, life has always been good for Lola. Then she meets Angelica, who also works on the checkout. But Angelica’s life is the complete opposite. She grew up in care, suffering abuse and ending up in a cycle of poverty and despair. Lola befriends Angelica but will she come to regret it?

Well that’s what you need to read the book to find out but as I hinted at before, this book is not a fluffy, hearts and flowers sort of story at all. I was sometimes very surprised by the turn the story was taking and there are some major life issues covered.

I liked Lola and Angelica a lot. Both are interesting characters, very well drawn. I wasn’t entirely convinced by Lola’s reaction to something quite life-changing happening to her, but I think it’s possibly because the author was trying to keep a lighter sheen on what could otherwise be a very very dark novel.

There were some bits that made me smile though. Lola’s parents are sex mad and with her having moved back home she keeps coming across them in various states of undress and passion. Her blind date near the beginning of the book was fun too.

I thought Angelica Stone was a really good read, shocking at times and entertaining at others, but overall very engaging. If you want to delve into the dark underbelly of the characters you read about then this is a book for you. a Rafflecopter giveaway
*Terms and Conditions –UK entries welcome.  Please enter using the Rafflecopter box below.  The winner will be selected at random via Rafflecopter from all valid entries and will be notified by Twitter and/or email. If no response is received within 7 days then the giveaway organiser reserves the right to select an alternative winner. Open to all entrants aged 18 or over.  Any personal data given as part of the competition entry is used for this purpose only and will not be shared with third parties, with the exception of the winners’ information. This will passed to the giveaway organiser and used only for fulfilment of the prize, after which time the data will be deleted.  I am not responsible for despatch or delivery of the prize. Susi Osborne is the author of The Ripples of Life, Grace & Disgrace, Secrets, Lies & Butterflies and Angelica Stone. She lives in Cheshire with her Scottish husband, her actress daughter and their two mischievous little dogs. Susi also has an adult son and a grandson who live nearby. Amongst friends their house is known affectionately (she hopes!) as the Osborne madhouse, for obvious reasons.

Before she became a writer, Susi worked in libraries for many years. She also worked as a classroom assistant in a junior school. In addition to her writing Susi organises Northwich LitFest, which she has been running for the past seven years. Alongside the writing of her latest book, Angelica Stone, Susi has been raising money for Centrepoint, the charity for youth homelessness, and has set up a Just Giving Page for the charity in her name.

Susi is a firm believer in the fact that it’s never too late to do anything. ‘You only have one life – go out and grab it with both hands!’